A look at the chemistry of water supplies including hardness and pH values.

Before boiler blowdown can be discussed and understood it is necessary to establish a definition of water along with its impurities and associated terms such as hardness, pH etc.

Water is the most important raw material on earth. It is essential to life, it is used for transportation, and it stores energy. It is also called the ‘universal solvent’.

Pure water (H20) is tasteless, odourless, and colourless in its pure state; however, pure water is very uncommon. All natural waters contain various types and amounts of impurities.

Good drinking water does not necessarily make good boiler feedwater. The minerals in drinking water are readily absorbed by the human body, and essential to our well being. Boilers, however, are less able to cope, and these same minerals will cause damage in a steam boiler if allowed to remain.

Of the world’s water stock, 97% is found in the oceans, and a significant part of that is trapped in the polar glaciers - only 0.65% is available for domestic and industrial use.

This small proportion would soon be consumed if it were not for the water cycle (see Figure 3.9.1). After evaporation, the water turns into clouds, which are partly condensed during their journey and then fall to earth as rain. However, it is wrong to assume that rainwater is pure; during its fall to earth it will pick up impurities such as carbonic acid, nitrogen and, in industrial areas, sulphur dioxide.

Charged with these ingredients, the water percolates through the upper layers of the earth to the water table, or flows over the surface of the earth dissolving and collecting additional impurities.

These impurities may form deposits on heat transfer surfaces that may:

Table 3.9.1 shows the technical and commonly used names of the impurities, their chemical symbols, and their effects. 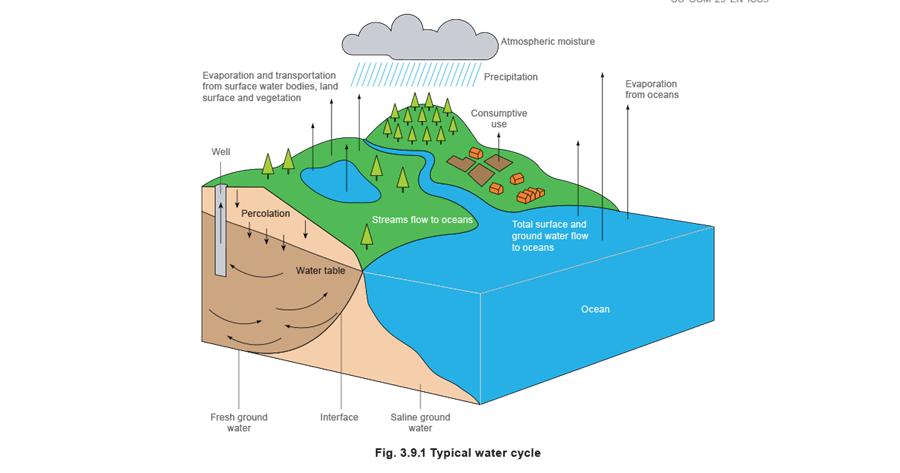 Water quality can vary tremendously from one region to another depending on the sources of water, local minerals (see Figure 3.9.2). Table 3.9.2 gives some typical figures for different areas in a relatively small country like the UK. 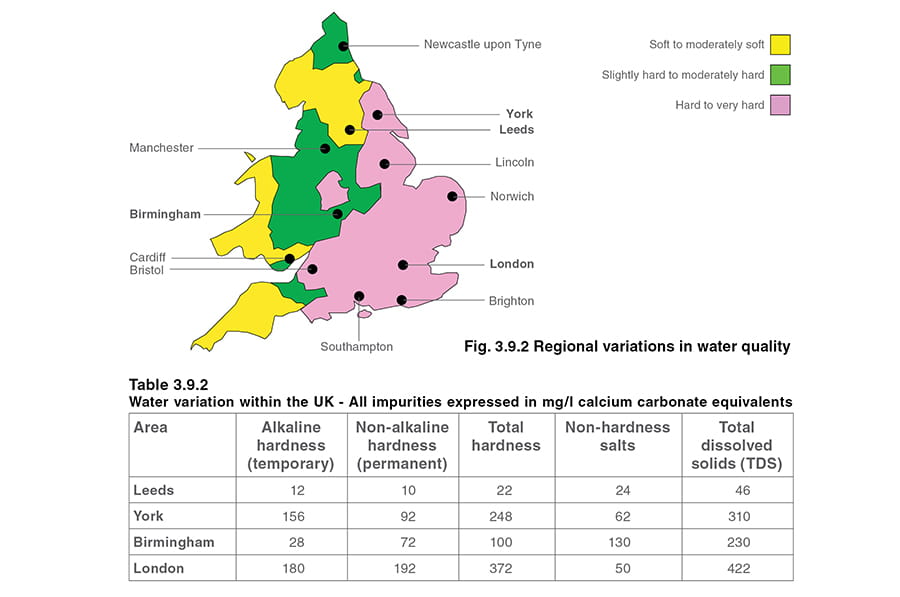 The common impurities in raw water can be classified as follows:

The amount of impurities present is extremely small and they are usually expressed in any water analysis in the form of parts per million (ppm), by weight or alternatively in milligrams per litre (mg/l).

The following sections within this Module describe the characteristics of water.

Water is referred to as being either ‘hard’ or ‘soft’. Hard water contains scale-forming impurities while soft water contains little or none. The difference can easily be recognised by the effect of water on soap. Much more soap is required to make a lather with hard water than with soft water.

Hardness is caused by the presence of the mineral salts of calcium and magnesium and it is these same minerals that encourage the formation of scale.

There are two common classifications of hardness:

The term ‘temporary hardness’ is sometimes used, because the hardness is removed by boiling.

This effect can often be seen as scale on the inside of an electric kettle.

See Figures 3.9.3 and 3.9.4 - the latter representing the situation within the boiler. 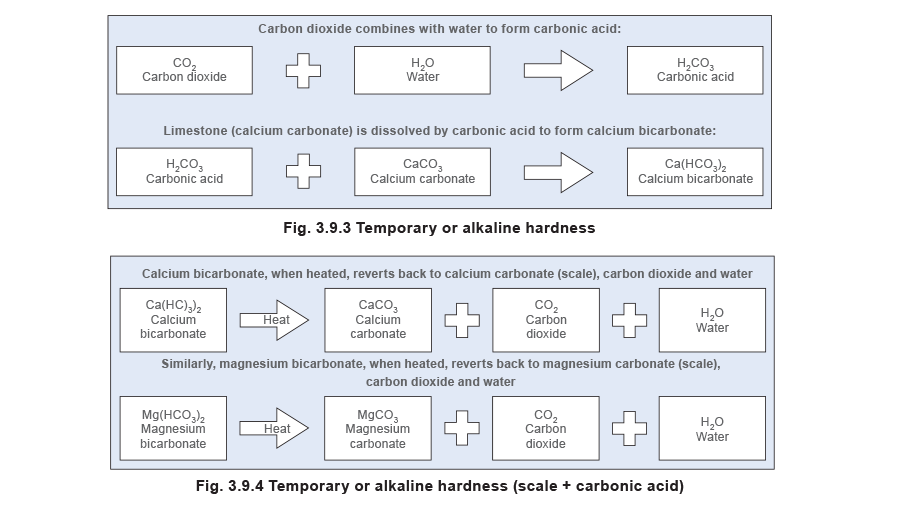 In addition, the presence of silica in boiler water can also lead to hard scale, which can react with calcium and magnesium salts to form silicates which can severely inhibit heat transfer across the fire tubes and cause them to overheat.

Non-hardness salts, such as sodium salts are also present, and are far more soluble than the salts of calcium or magnesium and will not generally form scale on the surfaces of a boiler, as shown in Figure 3.9.6.

The metallic parts (calcium, sodium, magnesium) can be identified as cations because they are attracted to the cathode and carry positive electrical charges.

Anions are non-metallic and carry negative charges - bicarbonates, carbonate, chloride, sulphate, are attracted to the anode.

Each impurity is generally expressed as a chemically equivalent amount of calcium carbonate, which has a molecular weight of 100.

Another term to be considered is the pH value; this is not an impurity or constituent but merely a numerical value representing the potential hydrogen content of water - which is a measure of the acidic or alkaline nature of the water. Water, H2O, has two types of ions - hydrogen ions (H+) and hydroxyl ions (OH-).

Table 3.9.3 shows the pH chart and Figure 3.9.7 illustrates the pH values already mentioned both numerically and in relation to everyday substances. 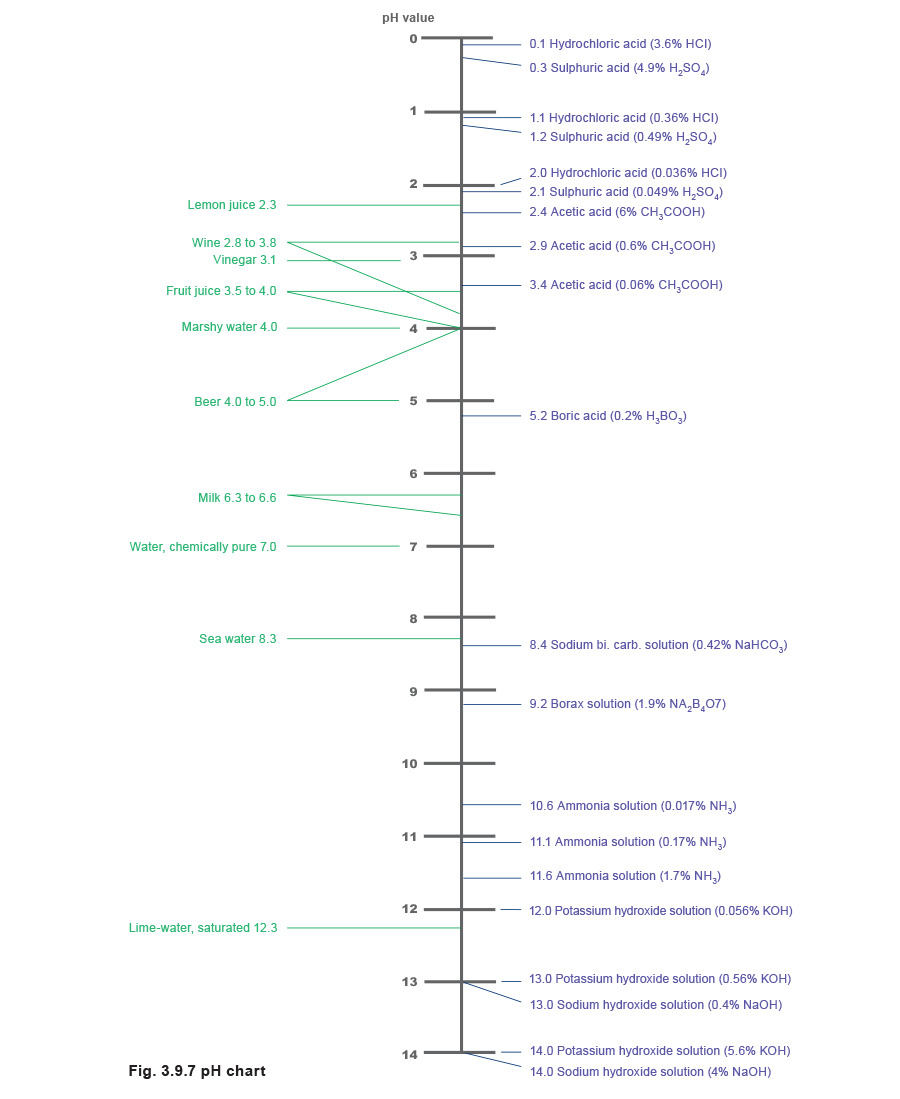