The level of water in a steam boiler must be carefully controlled, to ensure good quality steam is produced safely, efficiently and at the correct pressure.

The task of any steam boiler is to provide the correct amount of high quality steam: safely, efficiently, and at the correct pressure.

Steam is generated by heat from the combustion of fuel in a furnace, or by waste heat from a process. The heat is transferred to water in the boiler shell, which then evaporates to produce steam under pressure.

A certain area of water surface is required in a boiler from which to release the steam. A certain height should also be allowed above the normal working level, to allow the water level to rise with increasing load, but still allowing sufficient area to release the steam without carryover of water taking place.

The boilermaker will have designed the boiler to ensure that the area of the normal water level (NWL) is such that steam will be released at an acceptable velocity. The design will also allow a specific minimum height of the steam off-take above the NWL.

Clearly, as steam is generated, the water in the boiler evaporates, and the boiler must receive a supply of water to maintain the level. Because of the factors outlined above, water must be maintained at the correct level.

Safety is also of paramount importance. If the boiler operates with insufficient water, severe damage could occur and there is ultimately the risk of explosion.

For this reason, controls are required which will:

This action may include:

It is also essential to provide an external indication of the water level.

The following Sections within this Module give basic information on the automatic level controls and alarms as applied to shell and tube boilers. This information is also generally applicable to the steam drum of water-tube boilers.

For the purpose of continuity, much of the information in this Module is based upon UK legislation. Other national regulations must be consulted where relevant.

Water level indication applies to steam boilers where the water level can be detected. It includesmost steam boilers, the exception being those of the ‘once through’ or coil type, where there is no steam drum. In such cases, steam outlet temperatures exceeding a pre-set value are taken to indicate insufficient water input.

In most cases, the simple gauge glass on the steam / water drum or boiler shell is used as the indicator. Many standards stipulate the provision of two gauge glasses. Arrangements are usually required to prevent a breakage from causing a hazard to the operator. The most common form of protection is a toughened glass screen to the front and sides of the water gauge glass.

Water gauge glass constructed from flat or prismatic glass may be required for high-pressure boilers.

The gauge glass device, which has stood the test of time, is used on the vast majority of boilers and is usually arranged to give a visible range of water level above and below the normal water level. 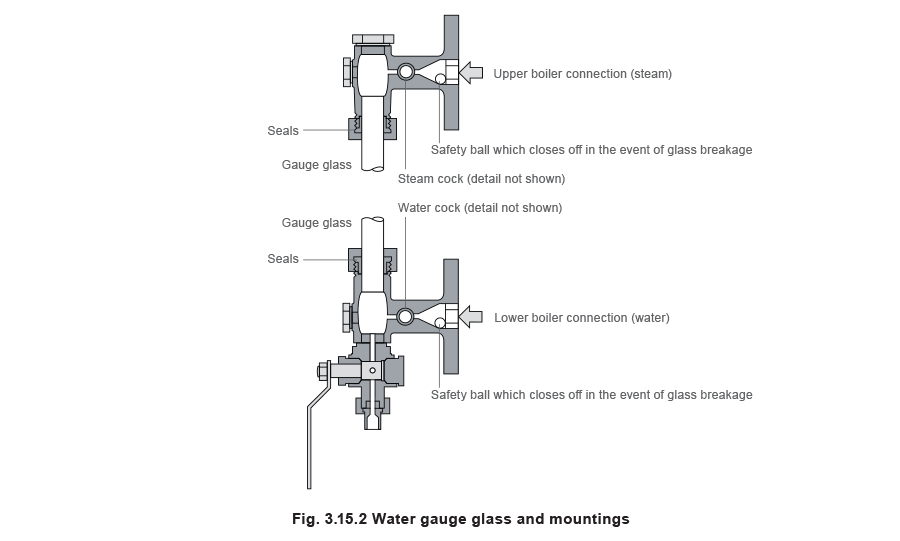 It is essential to understand what is seen in a boiler gauge glass. The following Section explains some of the factors which will influence the level of water indicated in the gauge glass.

It is not possible to define the exact water level in a steaming boiler, because the water surface is made up of a mass of bubbles with a strong horizontal circulation. There are therefore, level variations both across and along the boiler shell. Conversely, the gauge glass contains water which:

The height of the gauge glass water connection into the boiler.

The TDS and chemical analysis of the boiler water.

The size of the boiler shell.

The downward circulation must therefore be at the sides, in the centre section of the boiler. There could also be a ‘drawing’ effect from the steam off-take connection which will tend to raise the water locally.

During sudden load changes there is also the possibility of waves developing in the boiler, which can often be seen in the level gauge glass, but should ideally be ignored by the water level controls.

A summary of the level changes to be expected under various boiler conditions is illustrated in Figure 3.15.4. 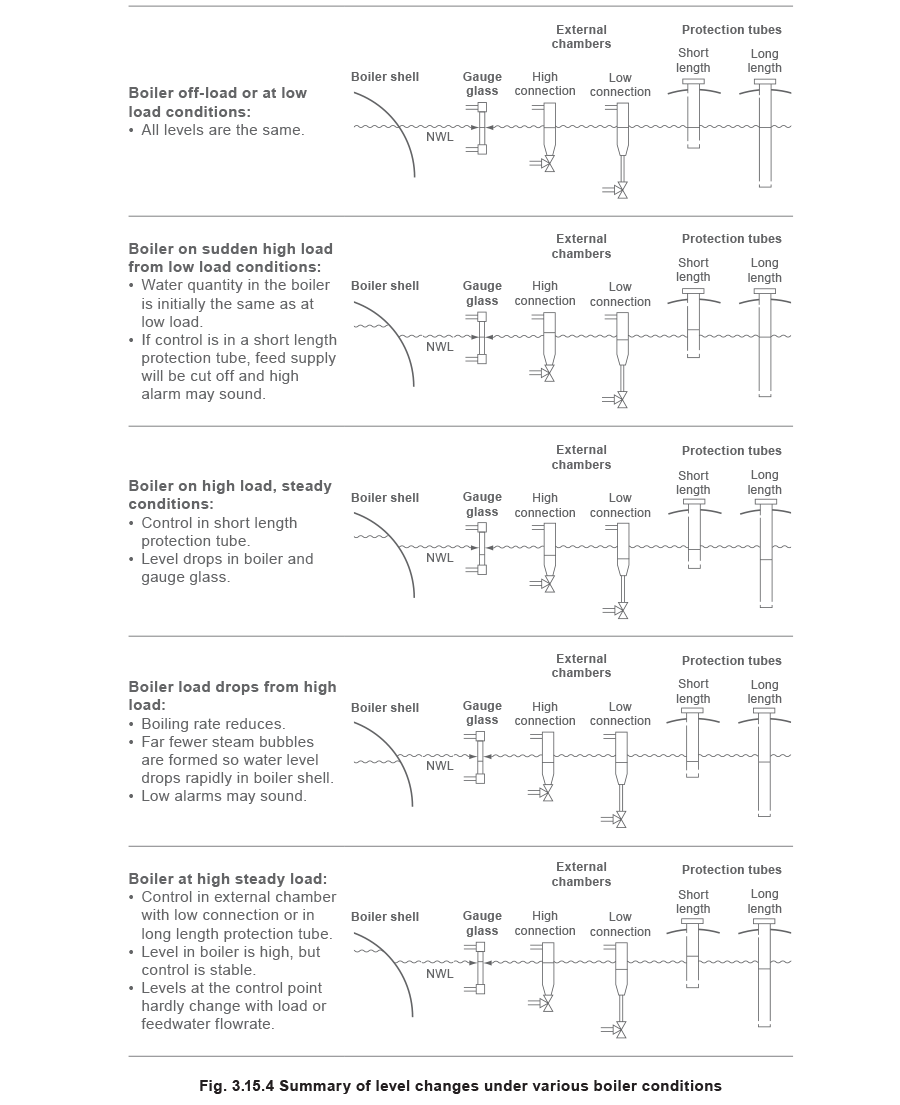