Home / Learn about steam /
Water for the Boiler

Water for the Boiler

A steam boiler plant must operate safely, with maximum combustion and heat transfer efficiency. To help achieve this and a long, low-maintenance life, the boiler water can be chemically treated.

Water for the Boiler

The operating objectives for steam boiler plant include:

The quality of the water used to produce the steam in the boiler will have a profound effect on meeting these objectives.

There is a need for the boiler to operate under the following criteria:

If the impurities in the boiler feedwater are not dealt with properly, carryover of boiler water into the steam system can occur. This may lead to problems elsewhere in the steam system, such as:

Carryover can be caused by two factors:

1. Priming - This is the ejection of boiler water into the steam take-off and is generally due to one or more of the following:

-Operating the boiler with too high a water level.

-Operating the boiler below its design pressure; this increases the volume and the velocity of the steam released from the water surface.

2. Foaming - This is the formation of foam in the space between the water surface and the steam off-take. The greater the amount of foaming, the greater the problems which will be experienced.

The following are indications and consequences of foaming:

-Water will trickle down from the steam connection of the gauge glass; this makes it difficult to accurately determine the water level.

-Alarms may be sounded, and the burner(s) may even ‘lockout’. This will require manual resetting of the boiler control panel before supply can be re-established.

These problems may be completely or in part due to foaming in the boiler. However, because foaming is endemic to boiler water, a better understanding of foam itself is required:

The following alternatives are open to the Engineering Manager to minimise foaming in the boiler:

If load changes are rapid and of large magnitude, the pressure in the boiler can drop considerably, initiating extremely turbulent conditions as the contents of the boiler flash to steam. To make matters worse, the reduction in pressure also means that the specific volume of the steam is increased, and the foam bubbles are proportionally larger.

If the plant conditions are such that substantial changes in load are normal, it may be prudent to consider:

-‘Surplussing controls’ that will limit the level to which the boiler pressure is allowed to drop.

-A steam accumulator (see Module 22 of this Block).

-‘Feed-forward’ controls that will bring the boiler up to maximum operating pressure before the load is applied.

-‘Slow-opening’ controls that will bring plant on-line over a pre-determined period.

-A high TDS level with its attendant economy of operation.

It is generally agreed that where possible on steam boilers, the principal feedwater treatment should be external to the boiler.

A summary of the treated water quality that might be obtained from the various processes, based on a typical hard raw water supply, is shown in Table 3.9.2. This is the water that the external treatment plant has to deal with.


External water treatment processes can be listed as:

An ion exchanger is an insoluble material normally made in the form of resin beads of 0.5 to 1.0 mm diameter. The resin beads are usually employed in the form of a packed bed contained in a glass reinforced plastic pressure vessel. The resin beads are porous and hydrophilic - that is, they absorb water. Within the bead structure are fixed ionic groups with which are associated mobile exchangeable ions of opposite charge. These mobile ions can be replaced by similarly charged ions, from the salts dissolved in the water surrounding the beads.

This is the simplest form of ion exchange and also the most widely used. The resin bed is initially activated (charged) by passing a 7 - 12% solution of brine (sodium chloride or common salt) through it, which leaves the resin rich in sodium ions. Thereafter, the water to be softened is pumped through the resin bed and ion exchange occurs. Calcium and magnesium ions displace sodium ions from the resin, leaving the flowing water rich in sodium salts. Sodium salts stay in solution at very high concentrations and temperatures and do not form harmful scale in the boiler.

From Figure 3.10.1 it can be seen that the total hardness ions are exchanged for sodium. With sodium base exchange softening there is no reduction in the total dissolved solids level (TDS in parts per million or ppm) and no change in the pH. All that has happened is an exchange of one group of potentially harmful scale forming salts for another type of less harmful, non-scale forming salts. As there is no change in the TDS level, resin bed exhaustion cannot be detected by a rise in conductivity (TDS and conductivity are related). Regeneration is therefore activated on a time or total flow basis.

Softeners are relatively cheap to operate and can produce treated water reliably for many years. They can be used successfully even in high alkaline (temporary) hardness areas provided that at least 50% of condensate is returned. Where there is little or no condensate return, a more sophisticated type of ion exchange is preferable.

Sometimes a lime/soda softening treatment is employed as a pre-treatment before base exchange. This reduces the load on the resins. 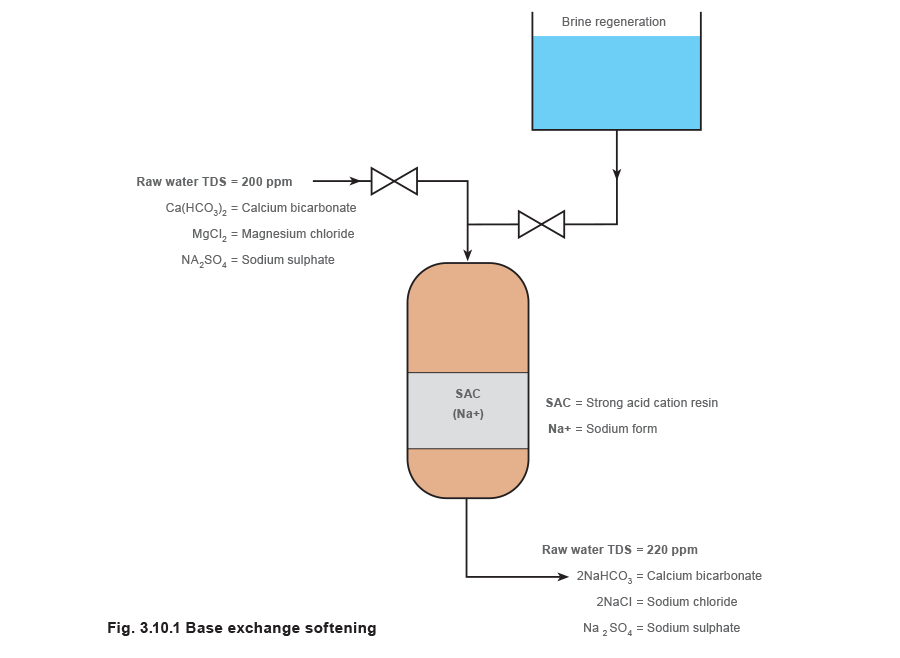 The disadvantage of base exchange softening is that there is no reduction in the TDS and alkalinity. This may be overcome by the prior removal of the alkalinity and this is usually achieved through the use of a dealkaliser.

There are several types of dealkaliser but the most common variety is shown in Figure 3.10.2. It is really a set of three units, a dealkaliser, followed by a degasser and then a base exchange softener. 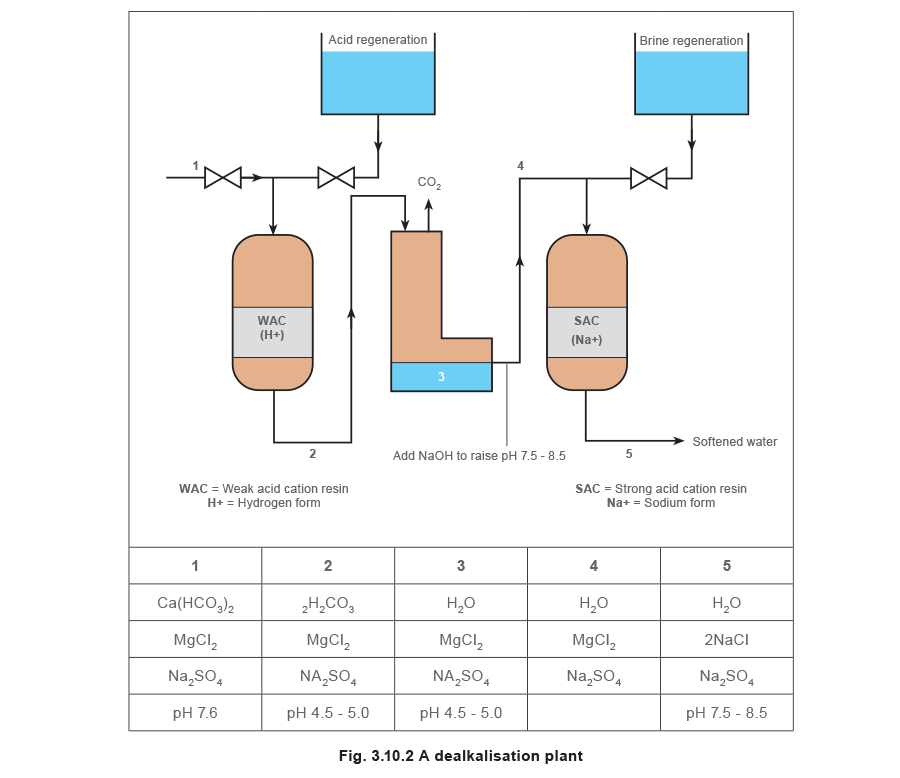 The system shown in Figure 3.10.3 is sometimes called ‘split-stream’ softening. A dealkaliser would seldom be used without a base exchange softener, as the solution produced is acidic and would cause corrosion, and any permanent hardness would pass straight into the boiler.

A dealkalisation plant will remove temporary hardness as shown in Figure 3.10.3. This system would generally be employed when a very high percentage of make-up water is to be used. 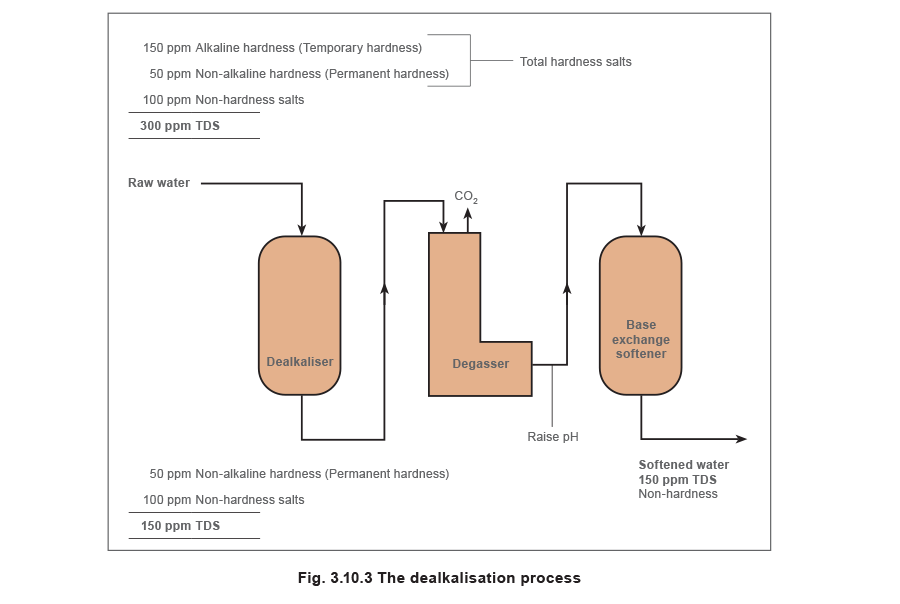 This process will remove virtually all the salts. It involves passing the raw water through both cation and anion exchange resins (Figure 3.10.4). Sometimes the resins may be contained in one vessel and this is termed ‘mixed bed’ demineralisation.

The process removes virtually all the minerals and produces very high quality water containing almost no dissolved solids. It is used for very high pressure boilers such as those in power stations.

If the raw water has a high amount of suspended solids this will quickly foul the ion exchange material, drastically increasing operating costs. In these cases, some pre-treatment of the raw water such as clarification or filtration may be necessary. 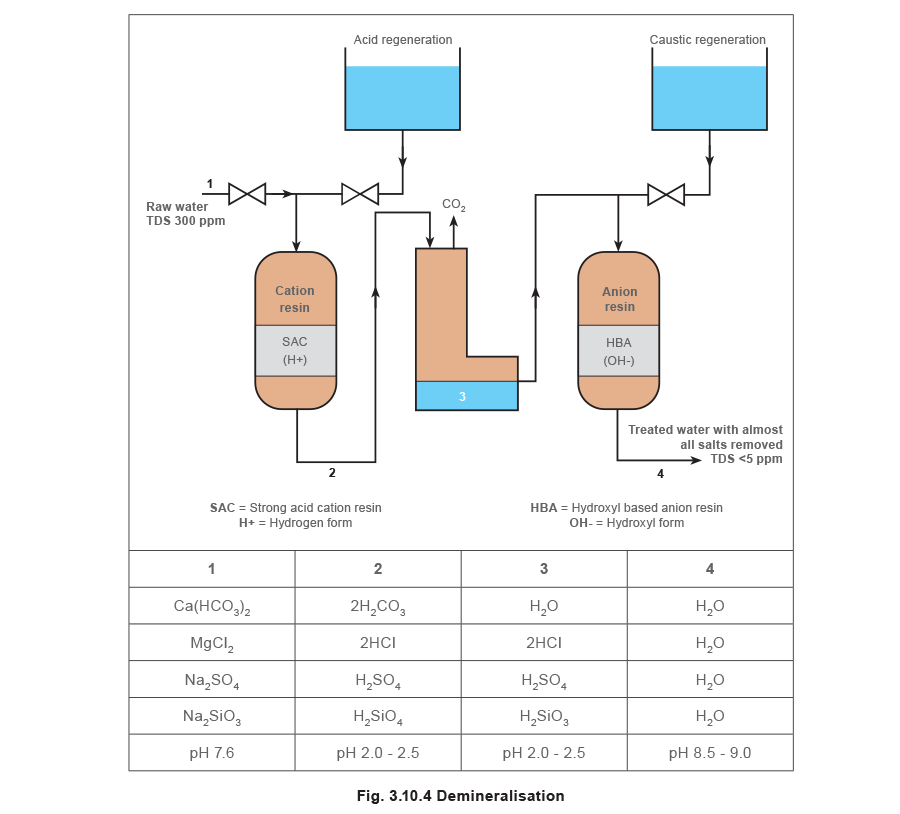 Looking at Table 3.10.1, it is tempting to think that a demineralisation plant should always be used. However, each system has a capital cost and a running cost, as Table 3.10.2 illustrates, plus the demands of the individual plant need to be evaluated. 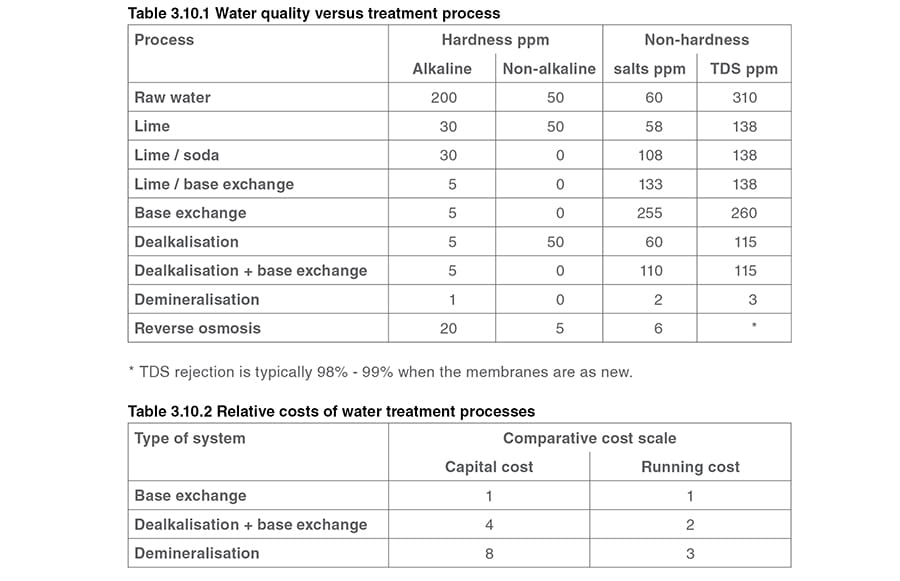 Generally, shell boilers are able to tolerate a fairly high TDS level, and the relatively low capital and running costs of base-exchange softening plants (see Table 3.10.2) will usually make them the first choice.

If the raw water supply has a high TDS value, and/or the condensate return rate is low (<40%), there are a few options which may be considered:

Water-tube boiler plant is much less tolerant of high TDS levels, and even less so as the pressure increases. This is due to a number of reasons, including:

This results in very high steam release rates per unit of water area, and turbulence.

Higher pressures also mean higher temperatures. This means that the materials of construction will be subjected to higher thermal stresses, and be operating closer to their metallurgical limitations. Even a small amount of internal contamination hindering the heat transfer from tubes to water may result in the tubes overheating.

The dry saturated steam from the steam drum may be directed to a superheater tubes situated in the highest temperature area of the furnace. Any carryover of contaminated water with the steam would coat the inside of the superheater tubes, and inhibit heat transfer with potentially disastrous results.

The above factors mean that:

In each of these cases, the selection will often be a demineralisation or a reverse osmosis plant.

The quality of raw water is obviously an important factor when choosing a water treatment plant. Although TDS levels will affect the performance of the boiler operation, other issues, such as total alkalinity or silica content can sometimes be more important and then dominate the selection process for water treatment equipment.