Overview of the different types of shell boiler with layouts, heat and steam release considerations plus pressure and output limitations.

Shell boilers may be defined as those boilers in which the heat transfer surfaces are all contained within a steel shell. Shell boilers may also be referred to as ‘fire tube’ or ‘smoke tube’ boilers because the products of combustion pass through the boiler tubes, which in turn transfer heat to the surrounding boiler water.

Several different combinations of tube layout are used in shell boilers, involving the number of passes the heat from the boiler furnace will usefully make before being discharged.

Figures 3.2.1a and 3.2.1b show a typical two-pass boiler configuration.

Figure 3.2.1a shows a dry back boiler where the hot gases are reversed by a refractory lined chamber on the outer plating of the boiler. Figure 3.2.1b shows a more efficient method of reversing the hot gases through a wet back boiler configuration. The reversal chamber is contained entirely within the boiler. This allows for a greater heat transfer area, as well as allowing the boiler water to be heated at the point where the heat from the furnace will be greatest - on the end of the chamber wall.

It is important to note that the combustion gases should be cooled to at least 420°C for plain steel boilers and 470°C for alloy steel boilers before entering the reversal chamber. Temperatures in excess of this will cause overheating and cracking of the tube end plates. The boiler designer will have taken this into consideration, and it is an important point if different fuels are being considered.

Several different types of shell boilers have been developed, which will now be looked at in more detail.

Sir William Fairbairn developed the Lancashire boiler in 1844 from Trevithick’s single flue Cornish boiler. Although only a few are still in operation, they were ubiquitous and were the predecessors of the sophisticated and highly efficient boilers used today.

The Lancashire boiler comprised a large steel shell usually between 5 - 9 m long through which passed two large-bore furnace tubes called flues. Part of each flue was corrugated to take up the expansion when the boiler became hot, and to prevent collapse under pressure. A furnace was installed at the entrance to each flue, at the front end of the boiler. Typically, the furnace would be arranged to burn coal, being either manually or automatically stoked.

The hot gaseous products of combustion passed from the furnace through the large-bore corrugated flues. Heat from the hot flue gases was transferred into the water surrounding these flues.

The boiler was in a brickwork setting which was arranged to duct the hot gases emerging from the flues downwards and beneath the boiler, transferring heat through the bottom of the boiler shell, and secondly back along the sides of the boiler before exiting through the stack.

These two side ducts met at the back of the boiler and fed into the chimney.

These passes were an attempt to extract the maximum amount of energy from the hot product gases before they were released to atmosphere.

Later, the efficiency was improved by the addition of an economiser. The gas stream, after the third pass, passed through the economiser into the chimney. The economiser heated the feedwater and resulted in an improvement in thermal efficiency.

One of the disadvantages of the Lancashire boiler was that repeated heating and cooling of the boiler, with the resultant expansion and contraction that occurred, upset the brickwork setting and ducting. This resulted in the infiltration of air, which upset the furnace draught.

These boilers would now be very expensive to produce, due to the large amounts of material used and the labour required to build the brick setting. The large size and water capacity of these boilers had a number of significant advantages:

This low velocity meant that, even with water containing high concentrations of Total Dissolved Solids (TDS), there was plenty of opportunity for the steam and water particles to separate and dry steam to be supplied to the plant.

As control systems, materials, and manufacturing techniques have become more sophisticated, reliable and cost effective, the design of boiler plant has changed.

The two-pass economic boiler was only about half the size of an equivalent Lancashire boiler and it had a higher thermal efficiency. It had a cylindrical outer shell containing two arge-bore corrugated furnace flues acting as the main combustion chambers. The hot flue gases passed out of the two furnace flues at the back of the boiler into a brickwork setting (dry back) and were deflected through a number of small-bore tubes arranged above the large-bore furnace flues. These small bore tubes presented a large heating surface to the water. The flue gases passed out of the boiler at the front and into an induced draught fan, which passed them into the chimney. A further development of the economic boiler was the creation of a three-pass wet back boiler which is a standard configuration in use today, (see Figure 3.2.4). 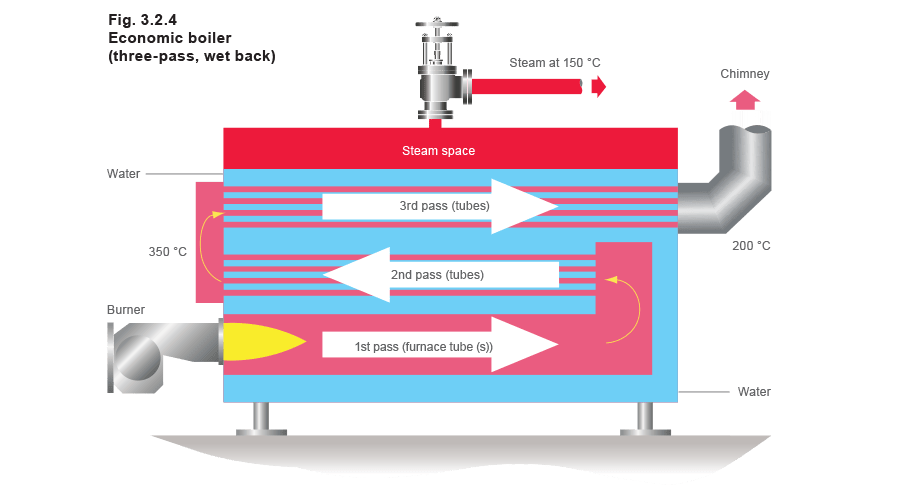 This design has evolved as materials and manufacturing technology has advanced: thinner metal tubes were introduced allowing more tubes to be accommodated, the heat transfer rates to be improved, and the boilers themselves to become more compact.

Typical heat transfer data for a three-pass, wet back, economic boiler is shown in Table 3.2.3.

In the early 1950s, the UK Ministry of Fuel and Power sponsored research into improving boiler plant. The outcome of this research was the packaged boiler, resulting from further development on the three-pass economic wet back boiler. Mostly, these boilers were designed to use oil rather than coal.

The packaged boiler is so called because it comes as a complete package with burner, level controls, feedpump and all necessary boiler fittings and mountings. Once delivered to site it requires only the steam, water, and blowdown pipework, fuel supply and electrical connections to be made for it to become operational.

Development has also had a significant effect on the physical size of boilers for a given output:

To some extent the universal awareness of the need for insulation, and the high performance of modern insulating materials, reduces this issue. Note that the figure for a modern boiler relative to a Lancashire boiler, is larger by a factor of almost eight, indicating a reduction in stored energy by a similar amount. This means that a reduced amount of stored energy is available in a modern boiler. This development has been made possible by control systems which respond quickly and with appropriate actions to safeguard the boiler and to satisfy demand.

This factor is calculated by dividing the amount of steam produced per second by the area of the water plane. The lower this number, the greater the opportunity for water particles to separate from the steam and produce dry steam.

Note the modern boiler’s figure is larger by a factor of almost three. This means that there is less opportunity for the separation of steam and water droplets.

This is made much worse by water with a high TDS level, and accurate control is essential for efficiency and the production of dry steam.

At times of rapidly increasing load, the boiler will experience a reduction of pressure, which, in turn, means that the density of the steam is reduced, and even higher steam release rates will occur, and progressively wetter steam is exported from the boiler.

Four-pass units are potentially the most thermally efficient, but fuel type and operating conditions may prevent their use. When this type of unit is fired at low demand with heavy fuel oil or coal, the heat transfer from the combustion gases can be very large. As a result, the exit flue gas temperature can fall below the acid dew point, causing corrosion of the flues and chimney and possibly of the boiler itself. The four-pass boiler unit is also subject to higher thermal stresses, especially if large load swings suddenly occur; these can lead to stress cracks or failures within the boiler structure. For these reasons, four-pass boilers are unusual. The stresses that may be imposed on the boiler are limited by national standards. Maximum stress will occur around the circumference of a cylinder. This is called ‘hoop’ or ‘circumferential’ stress. The value of this stress can be calculated using Equation 3.2.1:

From this it can be deduced that hoop stress increases as diameter increases. To compensate for this the boiler manufacturer will use thicker plate. However, this thicker plate is harder to roll and may need stress relieving with a plate thickness over 32 mm.

One of the problems in manufacturing a boiler is in rolling the plate for the shell. Boilermakers’ rolls, as shown in Figures 3.2.7 and 3.2.8, cannot curve the ends of the plate and will, hence, leave a flat:

When the plates are welded together and the boiler is pressurised, the shell will assume a circular cross section. When the boiler is taken off-line, the plates will revert to the ‘as rolled’ shape. This cycling can cause fatigue cracks to occur some distance away from the shell welds. It is a cause for concern to boiler inspectors who will periodically ask for all the boiler lagging to be removed and then use a template to determine the accuracy of the boiler shell curvature.

Obviously, this problem is of more concern on boilers that experience a lot of cycling, such as being shutdown every night, and then re-fired every morning.

Heat transfer through the furnace tubes is by conduction. It is natural that thick plate does not conduct heat as quickly as thin plate. Thicker plate is also able to withstand more force.

This is of particular importance in the furnace tubes where the flame temperature may be up to 1 800°C, and a balance must be struck between:

The equation that connects plate thickness to structural strength is Equation 3.2.1:

Equation 3.2.1 shows that as the plate thickness gets less, the stress increases for the same boiler pressure.

The equation that connects plate thickness to heat transfer is Equation 2.5.1:

For any one boiler, if the heat transfer rate (q_dot - body text.jpg) is increased, the maximum allowable boiler pressure is reduced.

A compromise is reached with a furnace tube wall thickness of between 18 mm and 20 mm. This translates to a practical pressure limit for shell boilers of around 27 bar.

Shell boilers are manufactured as packaged units with all the ancillary equipment fixed into position. After manufacture, the packaged boiler must be transported to site and the largest boiler which can be transported by road in the UK has an output of around 27 000 kg/h.

If more than 27 000 kg/h is required, then multi-boiler installations are used. However, this has the advantage of providing better security of supply and improved plant turndown.

Today’s highly efficient and responsive shell boiler is the result of more than 150 years of development in:

To guarantee its successful and efficient operation, the user must:

This can also be a disadvantage in that when the energy in the stored water is used, it may take some time before the reserve is built up again.

The package principle means that approximately 27 000 kg/h is the maximum output of a shell boiler. If more steam is required, then several boilers need to be connected together.

The large diameter cylinders used in the construction of shell boilers effectively limit their operating pressure to approximately 27 bar. If higher pressures are needed, then a water-tube boiler is required.

Top Of The Page
Previous - Introduction Next - Water Tube Boilers