A detailed explanation of on/off, modulating, two and three element automatic level control, with a comparison of pros and cons.

All the methods of level detection described so far can be used to produce an on/off signal for level control. The most common method of level control is simply to start the feedpump at a low level and allow it to run until a higher water level is reached within the boiler. 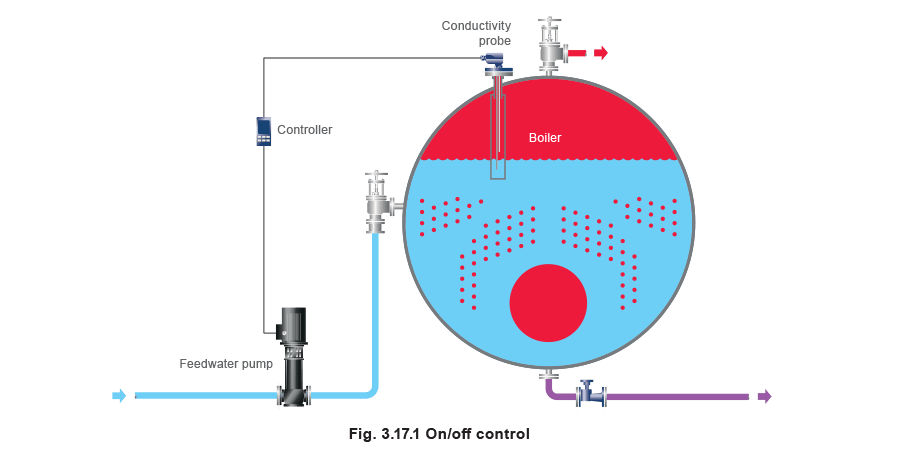 In the UK, on/off type control is almost universal on boilers below about 5 000 kg/h steam generation rate because it is the least expensive option. (In Australia and New Zealand, standards state that for boilers exceeding 3 MW (typically 5 000 kg/h), modulating control must be fitted).

It can be argued, however, that this type of on/off control is not ideal for boiler control, because the relatively high flowrate of ‘cold’ feedwater when the pump is on reduces the boiler pressure.

This causes the burner firing rate to continuously vary as the pump switches on and off.

If steam loads are high, the variable steam flowrate will tend to increase water carryover with the steam, and will tend to make water levels increasingly unstable with the associated danger of low water level lockout, particularly on multi-boiler installations.

However, the fact remains that on/off control is very widely used on boilers of small to medium output, as defined above, and that many problems associated with steam boilers operating with large swings in load are due in part to on/off level control systems.

In this type of system the feedpump runs continuously, and an automatic valve (between the feedpump and the boiler) controls the feedwater flowrate to match the steam demand.

For modulating level control, the following methods can be used to sense the water level: 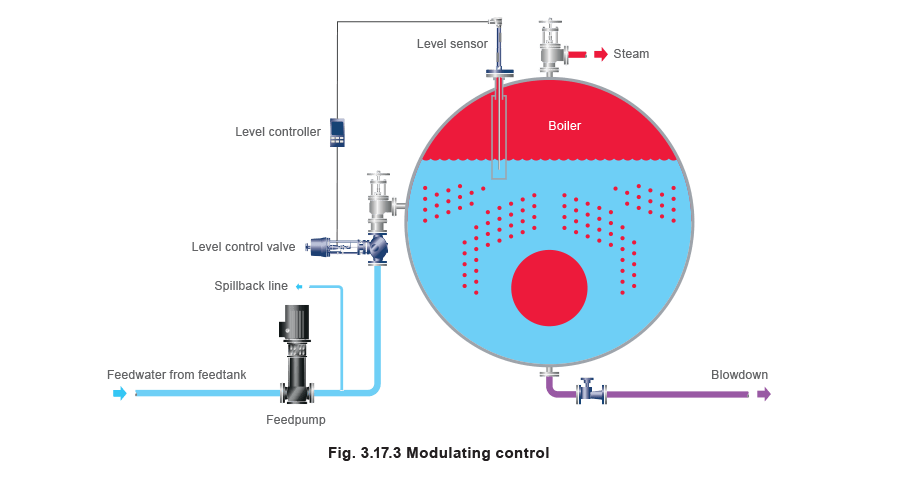 To protect the feedpump from overheating when pumping against a closed modulating valve, a recirculation or spill-back line is provided to ensure a minimum flowrate through the pump.

This recirculation may be controlled by a valve or with an orifice plate. The amount of water to be recirculated is not great, and guidance is usually available from the pump manufacturer. As an indication, the orifice size will usually be between 5 mm and 7 mm for a typical boiler.

In this type of system, a modulating signal representing boiler water level (for example, from a capacitance probe) is directed to an electrical frequency controller. This controller in turn varies the frequency of the ac voltage to the boiler feedwater pump motor, and hence varies its speed.

In this way the speed of the pump is modulated to provide a feedwater flowrate which matches the boiler’s demand for feedwater.

There are two ways that variable speed drive technology is generally applied:

With recirculation - When demand is satisfied and the motor speed is reduced to its minimum, and some recirculation of feedwater to the feedtank is still required to avoid the pump overheating (see Figure 3.17.5).

Without recirculation - In this case the motor controller stops the feedpump at very low boiler loads, so recirculation is not required.

Two important factors related to stopping and starting of the pump are:

The principle advantage of variable speed drives is that as the speed of the pump varies, so does its power consumption, and, of course, reduced power consumption means reduced running costs.

However, the cost savings from using variable speed drives must be related to the higher cost of the control equipment. This is usually only viable for large boilers with wide variations in load or which operate in a lead/lag manner.

However, where there are very sudden load changes, on some types of water-tube boiler, single element control has its limitations.

Consider the situation when a boiler is operating within its rated capacity:

If a sudden load is now applied to the boiler:

Two element control reverses the falling level control characteristic to ensure that the water level is made to rise at high steaming rates. This strives to ensure that the quantity of water in the boiler stays constant at all loads, and that during periods of increased, sudden steam demand, the feedwater control valve opens.

The system works by using the signal from a steam flowmeter installed in the steam discharge pipework to increase the level controller set point at high steam loads.

The two elements of the signal are:

Any boiler installation which experiences frequent, sudden changes in load may work better with a two element feedwater control system.

Where process load changes are severe (breweries are a common application) two element control should be considered and would appear to be necessary where there are sudden load changes of more than 25%, on a boiler.

Three element control as shown in Figure 3.17.8, involves the two signal elements as previously mentioned, plus a third element, which is the actual measured flowrate of feedwater into the boiler. Three element control is more often seen in boiler houses where a number of boilers are supplied with feedwater from a common, pressurised ring main.

Under these circumstances the pressure in the feedwater ring main can vary depending on how much water is being drawn off by each of the boilers. 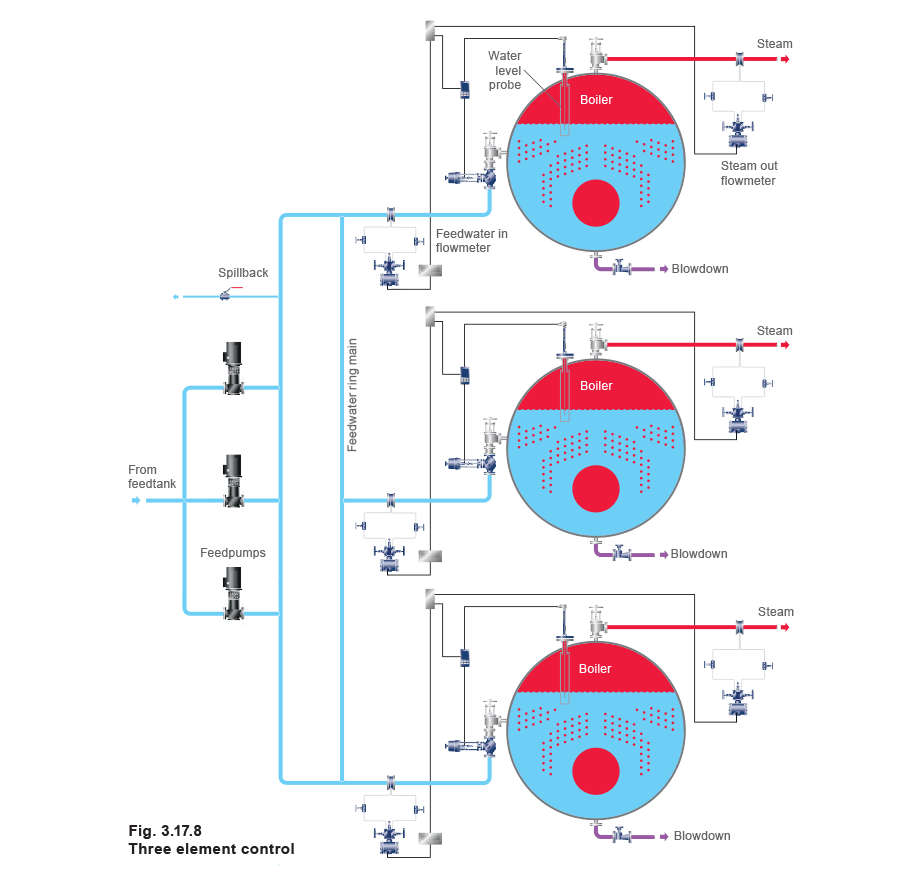 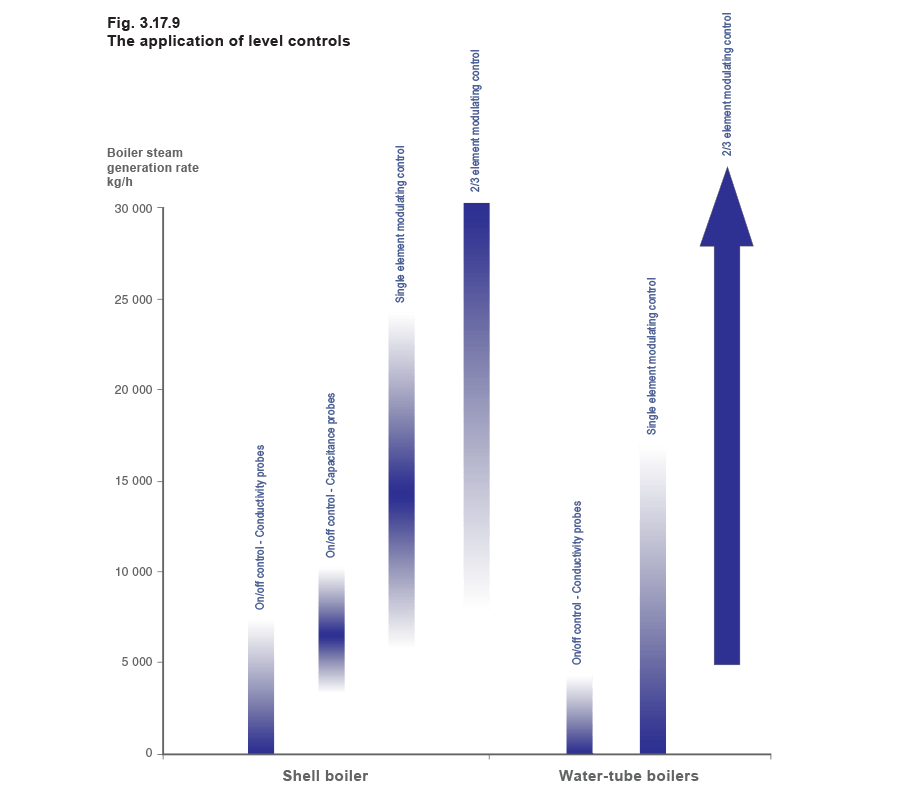