Selection tables and advice on trap selection for a range of different processes are included in this tutorial, including boiling pans, retorts, digesters, coppers, reboilers, evaporators and vulcanisers.

Process boiling pans are used in many industries for heating a wide range of materials, and nearly always have to heat up their contents as quickly as possible. In this respect they differ from canteen boiling pans. Steam pressures are normally high, and efficient removal of air and condensate is
vital. The traps fitted to fixed production pans must discharge condensate and air very quickly and must deal with a condensate load which varies widely between starting and running conditions.
The float-thermostatic trap is the ideal choice. The jacket will start up quicker if an air vent is placed opposite the steam inlet position. Provision is usually made for this.
Figure 11.9.1 shows a float-thermostatic trap fitted close up to the drain point. The thermodynamic trap can be a useful alternative particularly where the outlet is close to the ground, but it may be necessary to fit an air vent in a bypass around the thermodynamic trap for maximum production.
Balanced pressure thermostatic traps can also be used on small pans but must be fitted on an unlagged cooling leg. 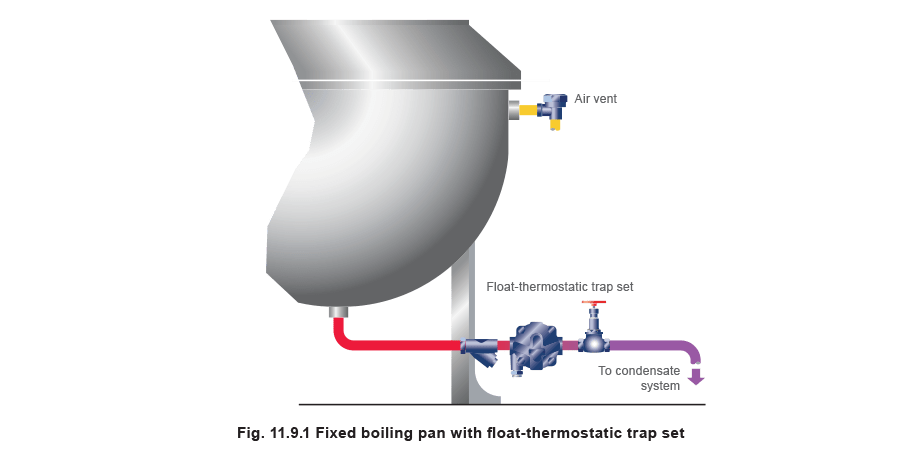 Figure 11.9.2, shows the arrangement when the trap cannot be fitted underneath the pan, and the condensate is removed by an internal fixed syphon pipe through a float-thermostatic trap with steam lock release.

A feature of all tilting-type jacketed pans (Figure 11.9.2) is that steam locking conditions are always present, however close the trap is fitted to the pan. The reason is that condensate must pass through a rising tube from the bottom of the jacket to the outlet trunnion. This rising passage fills with steam and causes the trap to remain closed, thus holding back the condensate, unless the proper precaution is taken. The trap must have a steam lock release feature.

If steam enters the jacket at the top, an additional air vent on the jacket will improve start-up times.​ 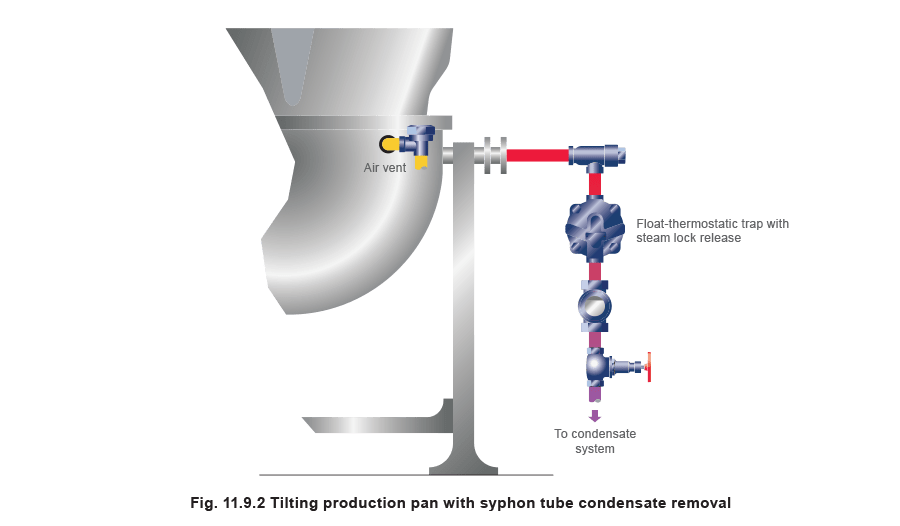 Retorts are generally large vessels into which a product is placed for processing or cooking with relatively low pressure steam.
An example would be a canning retort into which sealed tins of food are placed. Steam is then used to heat or cook the contents of the can. Once the door is closed, it is vital to ensure that all the air and condensate is removed and replaced by dry saturated steam. A float-thermostatic trap (with its inbuilt air vent) is ideal, especially due to its ability to pass large volumes of condensate at relatively low pressure.
On such a large steam space, air removal can be a problem. If all the air is not removed, process temperatures will fall, resulting in product spoilage. If the steam inlet is at the bottom, fit balanced pressure air vents at the top. If steam enters at the top, add additional air vents near the bottom (Figure 11.9.3).

Figure 11.9.4 shows an alternative method of venting a large autoclave using a self-acting temperature control as a large capacity air vent. Where there is a cooling cycle, the traps and air vents must be suitably valved and bypassed.

Heat is provided by a steam jacket which will be full of air on start-up. The steam inlet position can vary, being at the bottom, in the middle or at the top of the jacket. The first two call for balanced pressure air vents at the top of the jacket (Figure 11.9.5) but for a 'top' inlet, fit the vents near the bottom. In all cases drain the jacket with float-thermostatic traps, as shown. Thermodynamic traps are possible alternatives but additional air venting will usually be required. When the paddle is heated, drain it with a float-thermostatic trap which has a steam lock release.

These are used in many industries and conditions can be variable, but a typical application would be on the final drying section of a corrugating machine (Figure 11.9.6). Hotplates or steam chests can have varying pressures and condensate loads, due to variations in board thickness. Float-thermostatic or balanced pressure traps are both suited to this application, whilst thermodynamic traps also prove to be a useful alternative.
Generally, steam should not be fed from one end of the table and condensate drained at the other, as the condensate (and air) from any section has to pass through each succeeding section to get to the trap. This will result in longer heat-up times and reduced temperatures on the end sections. An improved method is to feed and drain each section individually. Figure 11.9.6 shows balanced pressure thermostatic traps and strainers which are generally suitable for these tables.

These are specialised types of evaporators requiring special consideration. Steam is usually supplied from below the 'copper', and the high demand of the heater can produce a peak at the boiler plant with the possibility of priming, so a separator in the line close to the 'copper' will ensure that dry steam is available.
The base coil is best drained using a float-thermostatic trap fitted close to the outlet. The heater must be capable of the greatest possible heat transfer with a smooth output to give continuous turbulence in the copper. This calls for a high capacity trap with continuous discharge, capable of handling the heavy starting load as well as the lighter running load. The float-thermostatic trap is ideally suited to this task.
Air venting is extremely important. If the design of the heater means that all the air is discharged through the condensate outlet, additional air venting capacity will be an advantage. Using a balanced pressure air vent fitted around the trap will maximise system purging at start-up (Figure 11.9.7).
Sometimes, the inherent design of the heater will cause air to collect at some other point, in which case separate air venting will be necessary.

Evaporators vary widely in design and use, but essentially include some form of heat exchanger to heat a process fluid. The steam heater is usually of the horizontal tube type shown in Figure 11.9.8.
Vertical tubes are also used, and these are often arranged in a calandria or a tube basket, with steam outside the tubes. Calandrias may be within the evaporator body, or an external heater or a reboiler may be used. Similar considerations apply in all these cases.
The condensing rate may be higher at ‘start-up’ than when boiling, but a good heat transfer rate is vital at all times. The trap must operate equally well on heavy or light loads and air must be freely discharged.
The float-thermostatic trap is the best choice, and should be fitted close to the condensate drain point. If this is not possible, use the float-thermostatic trap with steam lock release, plus, if necessary, an external air vent in a bypass.
The inverted bucket trap is an alternative when steam pressures are very high, or extreme waterhammer is present. An air vent bypass is always necessary with this arrangement.
With some heaters, output can be improved by additional air venting. The draining and air venting of multi-stage evaporators can be complicated by the fact that one or more stages may operate under vacuum, and special arrangements must be made utilising automatic pump-traps. The condensate may also be corrosive. Always seek expert advice on draining this equipment.

Condensate from the chamber can become acidic, making it corrosive to some traps. A float-thermostatic trap is still the best choice, or an inverted bucket trap with a separate air vent in parallel. Whichever is chosen, it should be of stainless steel construction to provide resistance to corrosive attack. Condensate must be dumped to waste due to contamination. Trap sets serving the chamber will need to be cleaned regularly.
The entry of steam at one end of the chamber makes it necessary to have air vents at high level at the opposite end of the chamber as well as within (or around) the trap. Draining and venting the jacket is more straightforward. A float-thermostatic trap should be used, together with an additional air vent fitted as far as possible from the steam inlet.