Steam should be available at the point of use in the correct quantity, at the correct pressure, clean, dry and free from air and other incondensable gases. This tutorial explains why this is necessary, and how steam quality is assured.

Steam should be available at the point of use:

The correct quantity of steam must be made available for any heating process to ensure that a sufficient heat flow is provided for heat transfer.

Similarly, the correct flowrate must also be supplied so that there is no product spoilage or drop in the rate of production. Steam loads must be properly calculated and pipes must be correctly sized to achieve the flowrates required.

Correct pressure and temp​erature of steam

Steam should reach the point of use at the required pressure and provide the desired temperature for each application, or performance will be affected. The correct sizing of pipework and pipeline ancillaries will ensure this is achieved.

However, even if the pressure gauge is correctly displaying the desired pressure, the corresponding saturation temperature may not be available if the steam contains air and/or incondensable gases.

Air and other incondensable gases

Air is present within the steam supply pipes and equipment at start-up. Even if the system were filled with pure steam the last time it was used, the steam would condense at shutdown, and air would be drawn in by the resultant vacuum.

However, if there is any turbulence the steam and air will mix and the air will be carried to the heat transfer surface. As the steam condenses, an insulating layer of air is left behind on the surface, acting as a barrier to heat transfer.

In a mixture of air and steam, the presence of air will cause the temperature to be lower than expected. The total pressure of a mixture of gases is made up of the sum of the partial pressures of the components in the mixture.

This is known as Dalton’s Law of Partial Pressures. The partial pressure is the pressure exerted by each component if it occupied the same volume as the mixture:

Note: This is a thermodynamic relationship, so all pressures must be expressed in bar a.

Consider a steam/air mixture made up of ¾ steam and ¼ air by volume.

The total pressure is 4 bar a.Determine the temperature of the mixture:

Other sources of air in the steam and condensate loop

Air can also enter the system in solution with the boiler feedwater. Make-up water and condensate, exposed to the atmosphere, will readily absorb nitrogen, oxygen and carbon dioxide: the main components of atmospheric air. When the water is heated in the boiler, these gases are released with the steam and carried into the distribution system.

Atmospheric air consists of 78% nitrogen, 21% oxygen and 0.03% carbon dioxide, by volume analysis. However, the solubility of oxygen is roughly twice that of nitrogen, whilst carbon dioxide has a solubility roughly 30 times greater than oxygen!
This means that ‘air’ dissolved in the boiler feedwater will contain much larger proportions of carbon dioxide and oxygen: both of which cause corrosion in the boiler and the pipework.

The temperature of the feedtank is maintained at a temperature typically no less than 80 °C so that oxygen and carbon dioxide can be liberated back to the atmosphere, as the solubility of these dissolved gases decreases with increasing temperature.
The concentration of dissolved carbon dioxide is also kept to a minimum by demineralising and degassing the make-up water at the external water treatment stage.

The concentration of dissolved gas in the water can be determined using Henry’s Law. This states that the mass of gas that can be dissolved by a given volume of liquid is directly proportional to the partial pressure of the gas.
This is only true however if the temperature is constant, and there is no chemical reaction between the liquid and the gas.

Layers of scale found on pipe walls may be either due to the formation of rust in older steam systems, or to a carbonate deposit in hard water areas. Other types of dirt which may be found in a steam supply line include welding slag and badly applied or excess jointing material, which may have been left in the system when the pipework was initially installed. These fragments will have the effect of increasing the rate of erosion in pipe bends and the small orifices of steam traps and valves.

For this reason it is good engineering practice to fit a pipeline strainer (as shown in Figure 2.4.2). This should be installed upstream of every steam trap, flowmeter, pressure reducing valve and control valve.

Steam flows from the inlet A through the perforated screen B to the outlet C. While steam and water will pass readily through the screen, dirt will be arrested. The cap D can be removed, allowing the screen to be withdrawn and cleaned at regular intervals.

When strainers are fitted in steam lines, they should be installed on their sides so that the accumulation of condensate and the problem of waterhammer can be avoided. This orientation will also expose the maximum strainer screen area to the flow.

A layer of scale may also be present on the heat transfer surface, acting as an additional barrier to heat transfer. Layers of scale are often a result of either:

The rate at which this layer builds up can be reduced by careful attention to the boiler operation and by the removal of any droplets of moisture.

Incorrect chemical feedwater treatment and periods of peak load can cause priming and carryover of boiler feedwater into the steam mains, leading to chemical and other material being deposited on to heat transfer surfaces. These deposits will accumulate over time, gradually reducing the efficiency of the plant.

In addition to this, as the steam leaves the boiler, some of it must condense due to heat loss through the pipe walls. Although these pipes may be well insulated, this process cannot be completely eliminated.

The overall result is that steam arriving at the plant is relatively wet, and the droplets of moisture carried along with the steam can erode pipes, fittings and valves especially if velocities are high.

It has already been shown that the presence of water droplets in steam reduces the actual enthalpy of evaporation, and also leads to the formation of scale on the pipe walls and heat transfer surface. The droplets of water entrained within the steam can also add to the resistant film of water produced as the steam condenses, creating yet another barrier to the heat transfer process.

A separator in the steam line will remove moisture droplets entrained in the steam flow, and also any condensate that has gravitated to the bottom of the pipe. In the separator shown in Figure 2.4.3 the steam is forced to change direction several times as it flows through the body. The baffles create an obstacle for the heavier water droplets, while the lighter dry steam is allowed to flow freely through the separator.

The moisture droplets run down the baffles and drain through the bottom connection of the separator to a steam trap. This will allow condensate to drain from the system, but will not allow the passage of any steam. 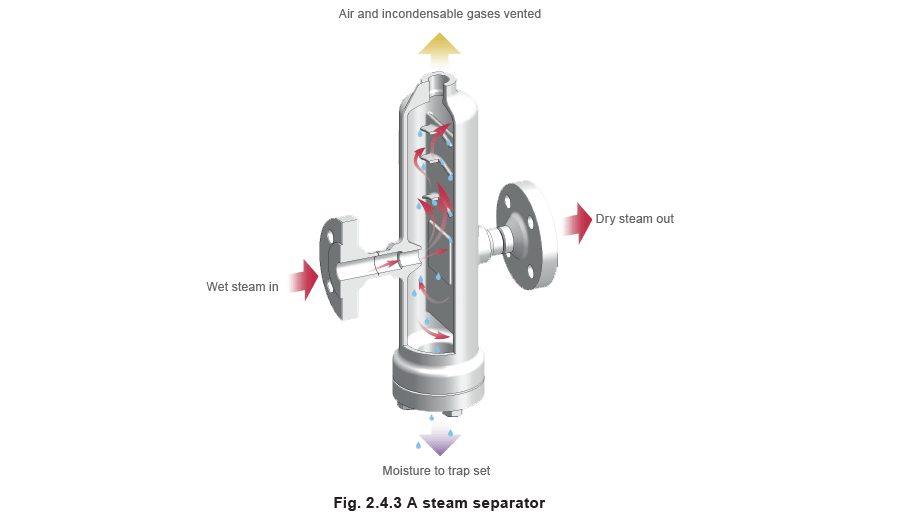 As steam begins to condense due to heat losses in the pipe, the condensate forms droplets on the inside of the walls. As they are swept along in the steam flow, they then merge into a film. The condensate then gravitates towards the bottom of the pipe, where the film begins to increase in thickness.


The build up of droplets of condensate along a length of steam pipework can eventually form a slug of water (as shown in Figure 2.4.4), which will be carried at steam velocity along the pipework (25 - 30 m/s).

This slug of water is dense and incompressible, and when travelling at high velocity, has a considerable amount of kinetic energy.

The laws of thermodynamics state that energy cannot be created or destroyed, but simply converted into a different form.

When obstructed, perhaps by a bend or tee in the pipe, the kinetic energy of the water is converted into pressure energy and a pressure shock is applied to the obstruction.

Condensate will also collect at low points, and slugs of condensate may be picked up by the flow of steam and hurled downstream at valves and pipe fittings.
These low points might include a sagging main, which may be due to inadequate pipe support or a broken pipe hanger. Other potential sources of waterhammer include the incorrect use of concentric reducers and strainers, or inadequate drainage before a rise in the steam main. Some of these are shown in Figure 2.4.5.

The noise and vibration caused by the impact between the slug of water and the obstruction, is known as waterhammer.

Waterhammer can significantly reduce the life of pipeline ancillaries. In severe cases the fitting may fracture with an almost explosive effect. The consequence may be the loss of live steam at the fracture, creating a hazardous situation.

The installation of steam pipework is discussed in detail in Block 10, Steam Distribution. 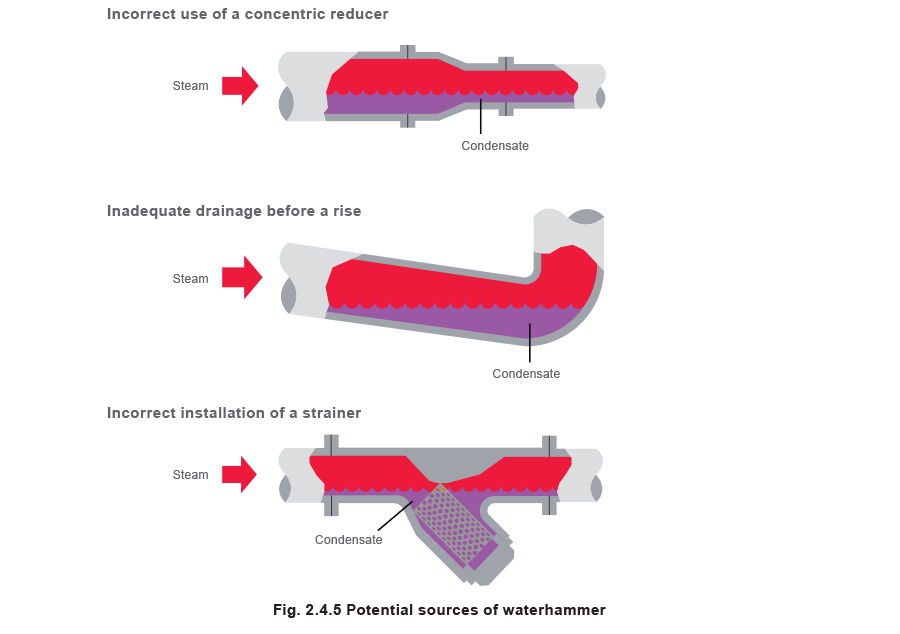 Top Of The Page
Previous - Superheated Steam Next - Heat Transfer