Not all heat exchangers are required to operate with a constant secondary flow. Typical applications might include the provision of hot water to batch processes such as tanks and vats. The supply of hot water to each tank is controlled either by means of an on-off ball valve or a modulating globe valve; there is no recirculation of water back to the heat exchanger. Cold make-up water is simply heated as per the hot water demand, as depicted in Figure 13.6.1. A modulating control valve on the steam supply to the heat exchanger regulates the temperature of the hot water being drawn off. The cold make-up water might be supplied from a pressurised main, and its temperature may alter seasonally. Its lowest probable temperature should be considered when considering the stall condition.

The stall chart can also be used in these types of installations, but the construction method for shell and tube heat exchangers is slightly different to that used for constant secondary flow. This method is described below.

The secondary fluid inlet temperature (Point C) should also be marked on the left vertical axis.

With reference to Figure 13.6.3, the secondary load line BC should be drawn connecting points B and C. A horizontal line should then be drawn from where BC crosses the 50% load ordinate, to the right axis. This represents the mean secondary fluid temperature, and is shown as point F.

The point at which this vertical line crosses the bottom horizontal axis (Point G) should mark the percentage load. As in the previous example, if the line DE is above the point A, stall occurs under all load conditions.

The percentage stall load can also be calculated using Equation 13.6.1:

It should be noted that the lowest operating steam temperature equals the set point temperature at point B. This occurs at 70°C in the stall chart, Figure 13.6.4, and is represented by point H on the steam line AF.

Referring to Figure 13.6.4, it can be seen in this example that the steam temperature at any load less than 37% is 70°C. In truth, the gradual fall in steam temperature is more like that depicted in Figure 13.6.5, but the difference is so small as to be insignificant with regard to selecting and sizing the trapping device.

What is the percentage load at stall, and what is the secondary flowrate through the heat exchanger at stall?

The lift in the condensate line of 7 m creates a differential pressure of 0.7 bar, in addition to the 0.5 bar g pressure in the condensate line. Therefore, the total system backpressure is 1.2 bar g. As the saturation temperature of steam at 1.2 bar g is 123°C, the horizontal line DE representing the backpressure is drawn at this temperature in Figure 13.6.6.

In this example the percentage load (Point G) is approximately 55%. This means that the secondary liquid flowrate must reduce to 55% of the maximum flowrate for stall to occur, that is, 55% of 3.64 L / s = 2 L / s. This can be verified mathmatically by using Equation 13.6.1. 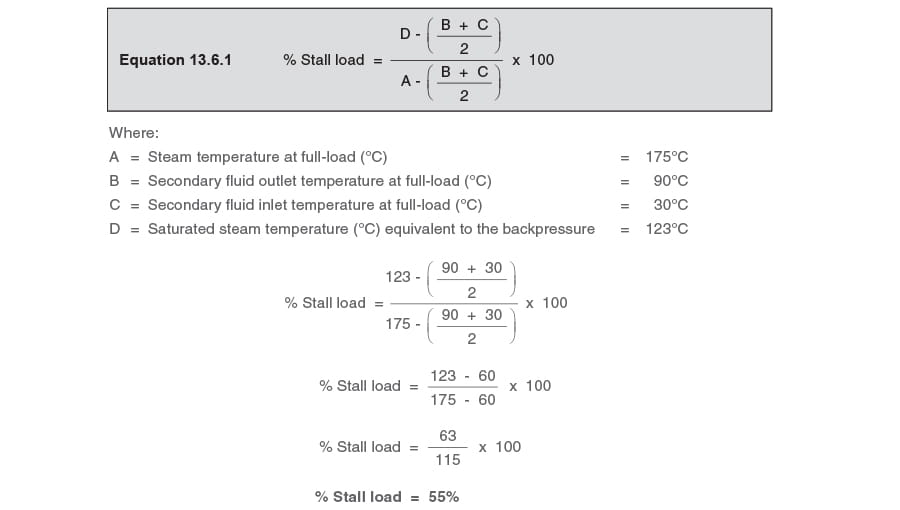 Most heat exchanger applications will either be varying flowrate or varying temperature as described above and in the previous Modules in Block 13.

There may, however, also be instances where both the flowrate and the inlet temperature of the secondary fluid vary. In these examples it becomes more difficult to determine their combined effect by interpretation of the stall chart. Systems such as these can be analysed by comparing the results from both methods shown above and using the worst case.