Heat exchangers are often bought oversized for the required duty. This tutorial looks at the reasons why, the effects this has and related requirements, such as trap sizing for oversized exchangers.

This is highly unlikely in practice as the designer or specifier will usually add other factors, including those for fouling and uncertainty of maximum operating loads. It is also unlikely that manufacturers can supply heat exchangers to match a specification exactly. As undersized heat exchangers are impractical they are usually bought oversized.

The operating conditions laid down in Example 13.2.1, Part ‘C’, have been reconsidered in Example 13.3.1 by adding 15% to the required heating area to account for contingencies.

To determine the steam temperature for the design condition, it is first necessary to find the new LMTD (ΔTLM) for the larger heating area (see Example 13.3.1). 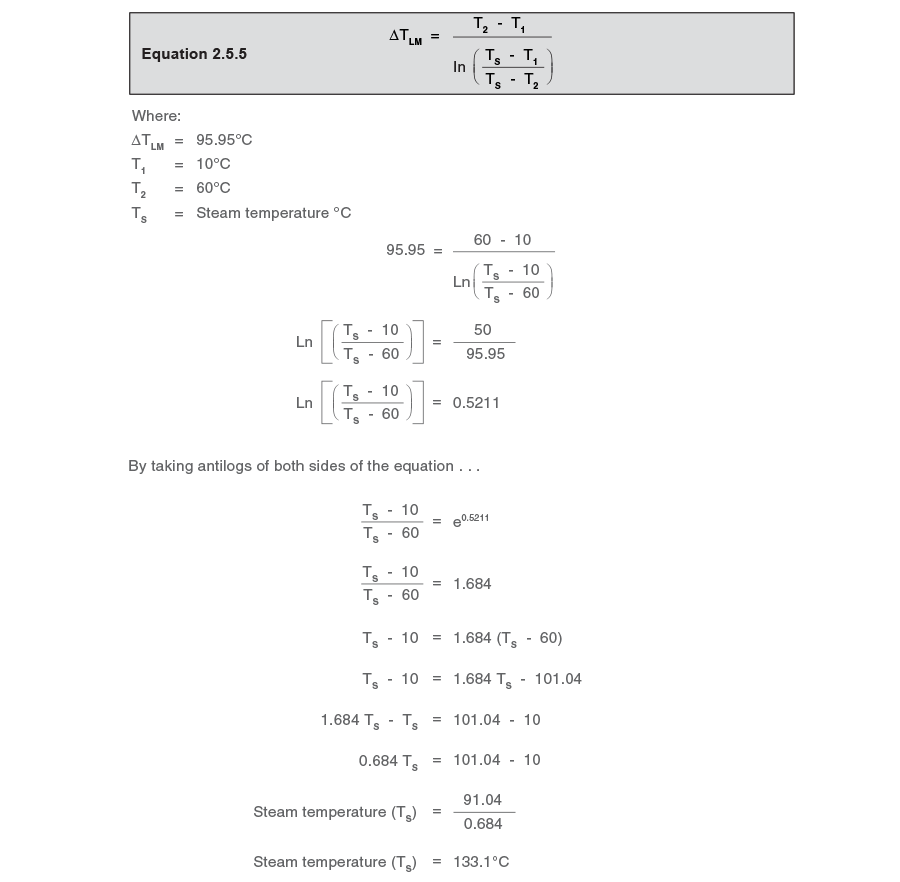 The steam flow was 536.6 kg/h in the perfectly sized heat exchanger (Example 13.2.1), so it can be seen that there is a slight drop (2.5%) in mass flowrate. This is due to the steam having a slightly larger enthalpy of evaporation in the larger heat exchanger due to its lower pressure.

Determine the TDC for the larger heat exchanger

Now that the steam temperature has been determined for the oversized heat exchanger (using the LMTD equation [Equation 2.5.5]), it is now possible to find its TDC, using Equation 13.2.2.

At the minimum heat load:

If the steam trap drains by gravity via a properly sized pipe to a vented condensate receiver or an open end, the backpressure should be very near atmospheric. Under these conditions, the differential pressure on a sizing chart can simply be read as the gauge pressure in the heat exchanger.

If, however, there is a lift after the trap (a rise in the trap discharge line), or the trap discharge line is undersized, or this line is pressurised for any other reason, the backpressure may, at times, be greater than the pressure in the steam space. When this is so, the differential pressure across the trap is reversed and is deemed to be a ‘negative differential pressure’. The trap capacity is now zero.

Sizing the steam trap for the oversized heat exchanger

The conditions that need consideration are: 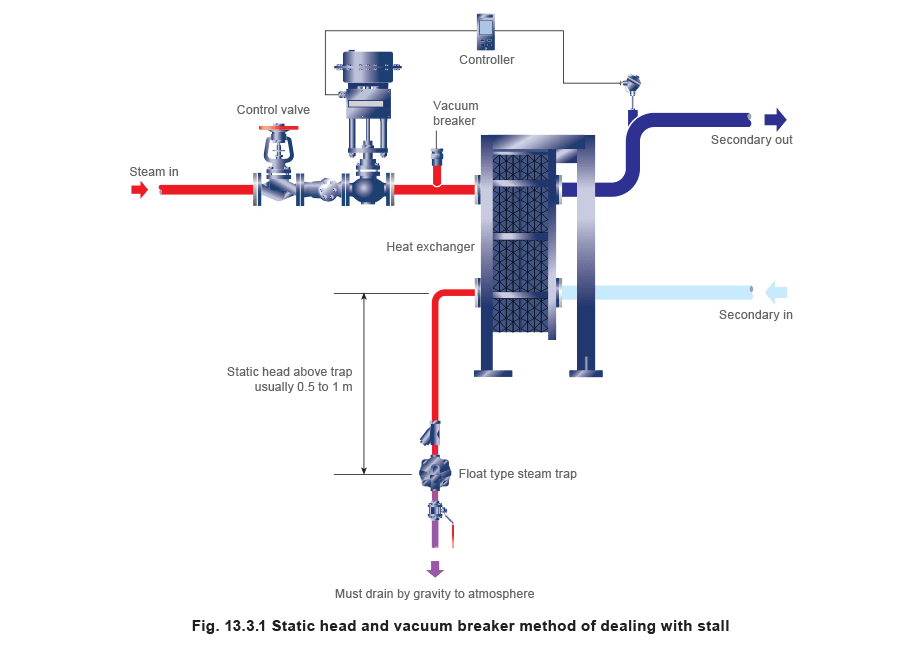 Consider, on the float trap capacity chart Figure 13.3.2, a DN25 (1”) FT14-4.5 ball float steam trap. It can be seen that it will pass 850 kg / h at a differential pressure of 1.95 bar. It may also be seen that at a differential pressure of 0.15 bar it will pass about 370 kg/h. In this example, consider the trap fitted to the oversized heat exchanger and draining by gravity to a vented condensate receiver, as depicted in Figure 13.3.1.

To ensure proper drainage, the steam trap has to be able to cope with all loads between the full-load and minimum load conditions.

As the condensate backpressure is atmospheric in this example, the minimum steam space pressure of 0.15 bar g is always higher than the backpressure. It can be seen from the capacity chart (Figure 13.3.2) that the trap has enough capacity at the minimum and maximum loads, so the DN25 (1") FT14-4.5 ball float steam trap is big enough.

If, however, in this example, the backpressure were higher than the minimum steam pressure of 0.15 bar g, the system would stall somewhere within the normal operating range. (This would only require a lift of just more than 1.5 metres after the trap to cause this). Accordingly, the trap would have to be selected and sized depending upon the amount of backpressure. With larger amounts of backpressure it may be necessary to fit a pump-trap.

Advice on how to select the correct trap for a heat exchanger is given in Module 13.4. 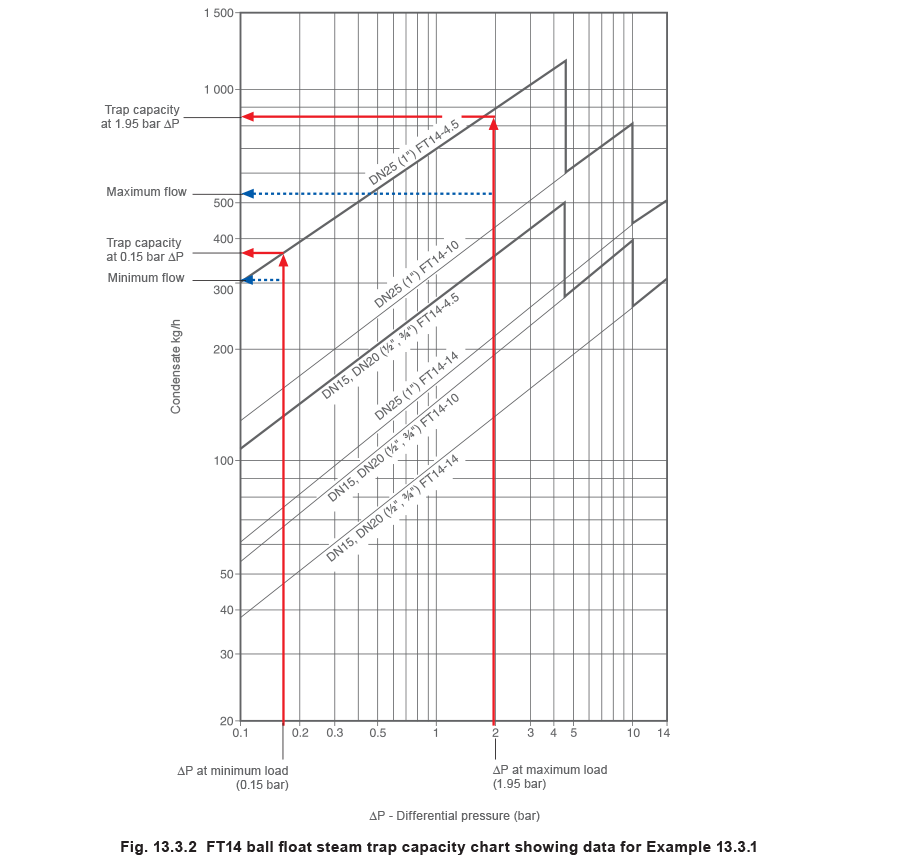