The simplest type of desuperheater is an unlagged section of pipe, where heat can be radiated to the environment. However, apart from the obvious risk of injury to personnel from such a hot item of plant, and the expensive energy wastage, this approach does not adjust to compensate for changes in the environmental conditions, steam temperature or steam flowrate. Several designs of desuperheater are available and it is recommended that the following properties be considered when sizing and selecting a suitable station for a given application:

This is an important parameter, as any variation in inlet pressure, temperature or flowrate will cause a variation in the requirement of cooling liquid.
In general, the two turndown values may be specified for a particular desuperheater:
Steam turndown ratio - This reflects the range of steam flowrates that the device can effectively desuperheat.
Cooling water turndown ratio - This reflects the range of cooling flowrates that can be used.
Although this directly affects the steam turndown ratio, the relationship depends on the temperatures of the superheated steam, the cooling water and the resulting desuperheated steam. Equation 15.1.1 is the mass/heat balance equation for this application:

If the required turndown cannot be achieved using a single desuperheater, two desuperheaters can be installed in parallel, with operation switching from one to another; or both can be in operation depending on steam demand.

It should be noted that the desuperheater itself is only one part of a desuperheating station, which will include the necessary control system for correct operation.

The following Sections include descriptions of the common types of desuperheater available, their limitations and typical applications.

This type of desuperheater (Figure 15.2.2) consists of a heat exchanger, typically a shell and tube, with superheated steam on one side, and the cooling medium on the other.

The shell of the first heat exchanger (containing the cooling water) is fixed at both ends on the inlet side, whereas on the outlet side, it is fixed at the bottom and open at the top. The floating head allows the pressure in the two sections of the shell to equalise.

The cooling medium is water at saturation temperature and pressure. As superheated steam enters the first and then the second set of tubes, it gives up heat to the water, some of which will be evaporated by this addition of energy. Any evaporated cooling water passes through the floating head and will accumulate in the outlet side of the shell. It then passes through the open end of the shell where it is mixed with the desuperheated steam. 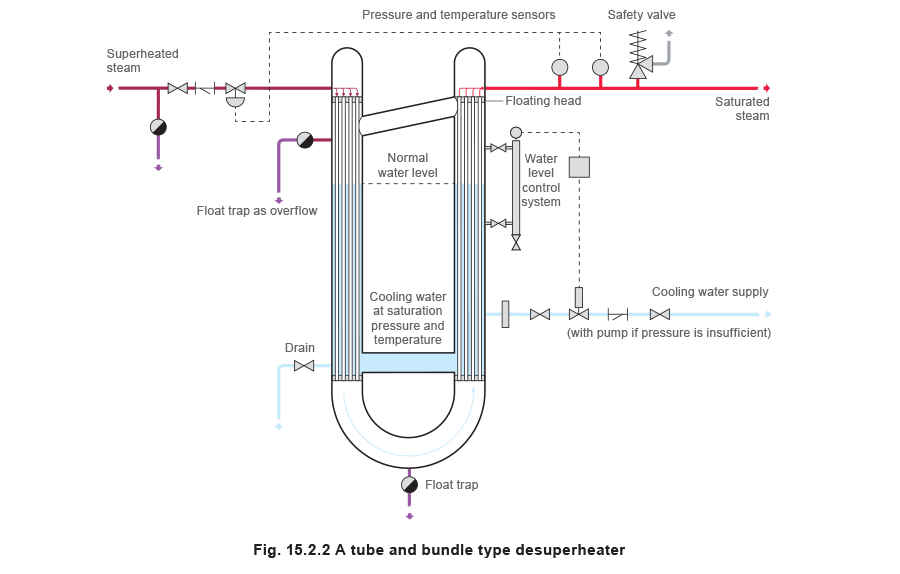 1. Those applications that experience wide variations in load.

This is the simplest form of direct contact desuperheater. The superheated steam is injected into a bath of water. This additional heat will cause saturated steam to evaporate from the surface of the bath. A pressure controller maintains a constant pressure in the vessel, and hence the temperature and pressure of the saturated steam in the downstream pipe. 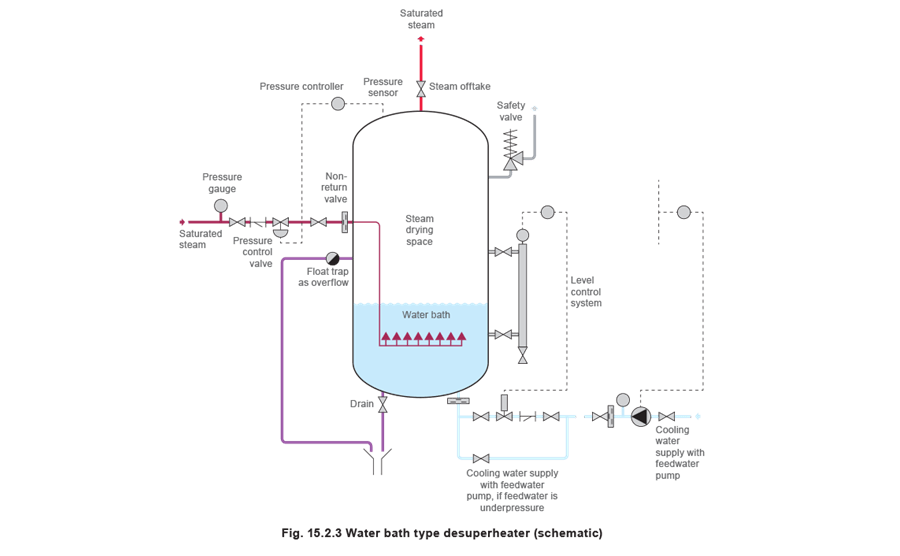 In addition to these high velocities, if poor piping design practices are used, the speed of the superheated steam could in theory approach Mach 1. At such speeds a number of problems would occur (including the generation of shock waves). However, this would be far in excess of the velocities used in good piping design. Typical velocities of steam entering a desuperheater should be around 40 to 60 m/s.

This means that if, for example, flow is increased by a factor of 5, the available pressure must increase by a factor of 52 = 25. The effect of this relationship is to severely hamper the turndown ratio.

In addition to affecting the cooling water flowrate, there are two other important considerations when determining the required cooling water pressure:

This direct relationship means that if, for example, flow is to be increased by a factor of 5, the available area must also increase by a factor of 5. This change may simply be achieved by an orifice, which has the ability to change in area (see Figure 15.2.4), or alternatively by altering the number of orifices passing the coolant.

The thermal sleeve also allows the circulation of superheated steam around the annular area between the sleeve and the inside diameter of the pipe. This provides a hot surface upon which the injected water can evaporate, as opposed to the walls of the desuperheater, which are inevitably cooler.

The simplest method of injecting cooling water is to introduce a nozzle through the pipe wall. 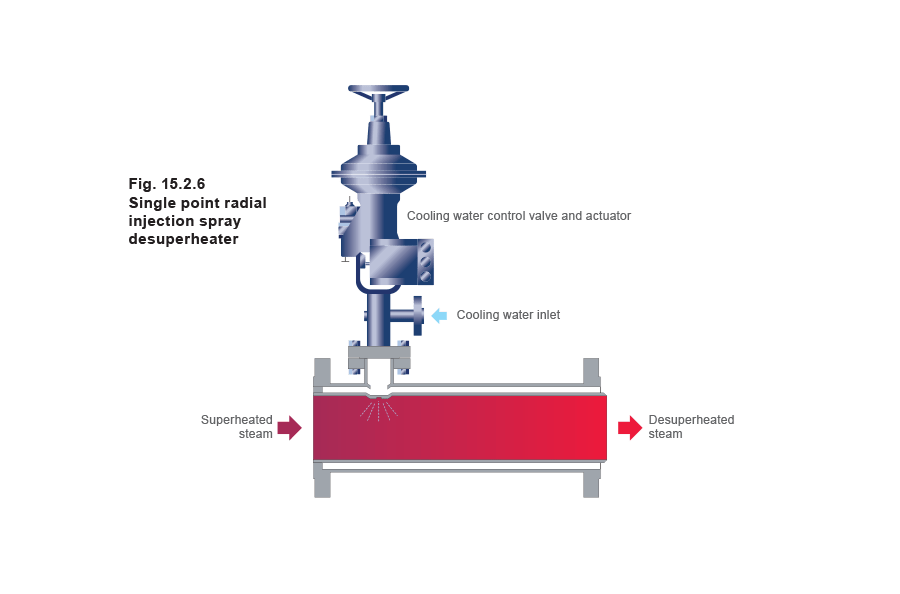 The cooling water particles are sprayed across the flow of the superheated steam. The quantity of cooling water injected is controlled by varying the position of the valve in the centre of the nozzle.

All of which mean a relatively constant cooling water requirement.

This is a progression of the single point radial injection spray desuperheater. Cooling water is sprayed in from a number of orifices around the perimeter of the pipe.

Other advantages, disadvantages and applications are similar to those of single point radial injection spray desuperheaters.

This is also a simple in-line injection spray desuperheater, but the point of injection is moved to the axis of the pipeline. The cooling water is injected into the steam flow via one or more atomising nozzles (see Figure 15.2.8). The unit usually employs a thermal sleeve.

Axial injection of the cooling water improves the mixing of the water and the superheated steam by two methods:

A modification of this basic arrangement involves turning the nozzle so that the cooling water is sprayed upstream, against the steam flow. The high velocity of the superheated steam reverses the spray water flow pattern and sends it back through a mixing chamber. This achieves more efficient mixing of the water and steam over a short absorption length.

1. Fixed area type - All the nozzles are open when the desuperheater is operating, and the cooling water is regulated by a spray water control valve.

2.  Variable spray type - The downstream temperature determines the number of exposed nozzles. Cooling water enters the desuperheater through the water jacket to the sealing area above the disc (see Figure 15.2.12). When an increase in the downstream steam temperature is detected by the associated temperature control system, the actuator moves the stem down, progressively exposing more nozzles. When the demand for the cooling water changes, the stem and disc arrangement moves up and down as required. This has the effect of changing the overall orifice area. 3.  Spring-assisted type - This is essentially a combination of the two previous types. Instead of the stem and disc arrangement being controlled by an actuator, the spring-assisted type contains a spring-loaded flow plug, which moves in response to a change in the differential pressure between the coolant and the superheated steam. The moving plug changes the number of open nozzles, thereby adjusting the flow into the main pipeline. In addition, the cooling water is regulated by a spray water control valve.

Being able to control both the pressure and flow of the cooling water enables accurate control over the amount of water injected into the superheated steam. This type does, however, require a high cooling water pressure.

All of which require a relatively constant desuperheating load.

Top Of The Page
Next - Basic Desuperheating Theory