Issues surrounding the structure, layout and operation of a steam distribution system, including condensate drain points and branch lines, the avoidance of waterhammer and the use of separators and strainers for steam conditioning.

Throughout the length of a hot steam main, an amount of heat will be transferred to the environment, and this will depend on the parameters identified in Block 2 - ‘Steam Engineering and Heat Transfer’, and brought together in Equation 2.5.1.

With steam systems, this loss of energy represents inefficiency, and thus pipes are insulated to limit these losses. Whatever the quality or thickness of insulation, there will always be a level of heat loss, and this will cause steam to condense along the length of the main.

The effect of insulation is discussed in Module 10.5. This Module will concentrate on disposal of the inevitable condensate, which, unless removed, will accumulate and lead to problems such as corrosion, erosion, and waterhammer.

In addition, the steam will become wet as it picks up water droplets, which reduces its heat transfer potential. If water is allowed to accumulate, the overall effective cross sectional area of the pipe is reduced, and steam velocity can increase above the recommended limits.

It is good engineering practice that, whenever possible, the main should be installed with a fall of not less than 1:100 (1 m fall for every 100 m run), in the direction of the steam flow. This slope will ensure that gravity, as well as the flow of steam, will assist in moving the condensate towards drain points where the condensate may be safely and effectively removed (See Figure 10.3.1).

The drain point must ensure that the condensate can reach the steam trap. Careful consideration must therefore be given to the design and location of drain points.

Consideration must also be given to condensate remaining in a steam main at shutdown, when steam flow ceases. Gravity will ensure that the water (condensate) will run along sloping pipework and collect at low points in the system. Steam traps should therefore be fitted to these low points.

The amount of condensate formed in a large steam main under start-up conditions is sufficient to require the provision of drain points at intervals of 30 m to 50 m, as well as natural low points such as at the bottom of rising pipework.

In normal operation, steam may flow along the main at speeds of up to 145 km/h, dragging condensate along with it. Figure 10.3.2 shows a 15 mm drain pipe connected directly to the bottom of a main.

Although the 15 mm pipe has sufficient capacity, it is unlikely to capture much of the condensate moving along the main at high speed. This arrangement will be ineffective.

A more reliable solution for the removal of condensate is shown in Figure 10.3.3. The trap line should be at least 25 to 30 mm from the bottom of the pocket for steam mains up to 100 mm, and at least 50 mm for larger mains. This allows a space below for any dirt and scale to settle.

The bottom of the pocket may be fitted with a removable flange or blowdown valve for cleaning purposes.

Waterhammer and its effects

Waterhammer is the noise caused by slugs of condensate colliding at high velocity into pipework fittings, plant, and equipment. This has a number of implications:

Indications of waterhammer include a banging noise, and perhaps movement of the pipe.

In severe cases, waterhammer may fracture pipeline equipment with almost explosive effect, with consequent loss of live steam at the fracture, leading to an extremely hazardous situation.

Good engineering design, installation and maintenance will avoid waterhammer; this is far better practice than attempting to contain it by choice of materials and pressure ratings of equipment.

Commonly, sources of waterhammer occur at the low points in the pipework (See Figure 10.3.6). Such areas are due to:

To summarise, the possibility of waterhammer is minimised by:

Branch lines are normally much shorter than steam mains. As a general rule, therefore, provided the branch line is not more than 10 metres in length, and the pressure in the main is adequate, it is possible to size the pipe on a velocity of 25 to 40 m/s, and not to worry about the pressure drop.

Table 10.2.4 ‘Saturated steam pipeline capacities for different velocities’ in Module 10.2 will prove useful in this exercise.

Branch line connections taken from the top of the main carry the driest steam (Figure 10.3.8). If connections are taken from the side, or even worse from the bottom (as in Figure 10.3.9 (a)), they can accept the condensate and debris from the steam main. The result is very wet and dirty steam reaching the equipment, which will affect performance in both the short and long term.

The valve in Figure 10.3.9 (b) should be positioned as near to the off-take as possible to minimise condensate lying in the branch line, if the plant is likely to be shutdown for any extended periods.

Low points will also occur in branch lines. The most common is a drop leg close to an isolating valve or a control valve (Figure 10.3.10). Condensate can accumulate on the upstream side of the closed valve, and then be propelled forward with the steam when the valve opens again - consequently a drain point with a steam trap set is good practice just prior to the strainer and control valve.

There are many occasions when a steam main must run across rising ground, or applications where the contours of the site make it impractical to lay the pipe with the 1:100 fall proposed earlier. In these situations, the condensate must be encouraged to run downhill and against the steam flow. Good practice is to size the pipe on a low steam velocity of not more than 15 m/s, to run the line at a slope of no less than 1:40, and install the drain points at not more than 15 metre intervals (see Figure 10.3.11).

The objective is to prevent the condensate film on the bottom of the pipe increasing in thickness to the point where droplets can be picked up by the steam flow.

Modern packaged steam boilers have a large evaporating capacity for their size and have limited capacity to cope with rapidly changing loads. In addition, as discussed in Block 3 ‘The Boiler House’, other circumstances, such as . . .

. . . can cause priming and carryover of boiler water into the steam mains.

Separators, as shown by the cut section in Figure 10.3.12, may be installed to remove this water.

As a general rule, providing the velocities in the pipework are within reasonable limits, separators will be line sized. (Separators are discussed in detail in Module 12.5)

A separator will remove both droplets of water from pipe walls and suspended mist entrained in the steam itself. The presence and effect of waterhammer can be eradicated by fitting a separator in a steam main, and can often be less expensive than increasing the pipe size and fabricating drain pockets.

A separator is recommended before control valves and flowmeters. It is also wise to fit a separator where a steam main enters a building from outside. This will ensure that any condensate produced in the external distribution system is removed and the building always receives dry steam. This is equally important where steam usage in the building is monitored and charged for.

When new pipework is installed, it is not uncommon for fragments of casting sand, packing, jointing, swarf, welding rods and even nuts and bolts to be accidentally deposited inside the pipe. In the case of older pipework, there will be rust, and in hard water districts, a carbonate deposit. Occasionally, pieces will break loose and pass along the pipework with the steam to rest inside a piece of steam using equipment. This may, for example, prevent a valve from opening/closing correctly. Steam using equipment may also suffer permanent damage through wiredrawing - the cutting action of high velocity steam and water passing through a partly open valve. Once wiredrawing has occurred, the valve will never give a tight shut-off, even if the dirt is removed.

It is therefore wise to fit a line-size strainer in front of every steam trap, flowmeter, reducing valve and regulating valve. The illustration shown in Figure 10.3.13 shows a cut section through a typical strainer.

Steam flows from the inlet ‘A’ through the perforated screen ‘B’ to the outlet ‘C’. While steam and water will pass readily through the screen, dirt cannot. The cap ‘D’, can be removed, allowing the screen to be withdrawn and cleaned at regular intervals. A blowdown valve can also be fitted to cap ‘D’ to facilitate regular cleaning.

Strainers can however, be a source of wet steam as previously mentioned. To avoid this situation, strainers should always be installed in steam lines with their baskets to the side.

Strainers and screen details are discussed in Module 12.4.

How to drain steam mains

Steam traps are the most effective and efficient method of draining condensate from a steam distribution system.

The steam traps selected must suit the system in terms of:

Pressure rating is easily dealt with; the maximum possible working pressure at the steam trap will either be known or should be established.

Capacity, that is, the quantity of condensate to be discharged, which needs to be divided into two categories; warm-up load and running load.

In the first instance, the pipework needs to be brought up to operating temperature. This can be determined by calculation, knowing the mass and specific heat of the pipework and fittings. Alternatively, Table 10.3.2 may be used.

Once the steam main is up to operating temperature, the rate of condensation is mainly a function of the pipe size and the quality and thickness of the insulation.

For accurate means of calculating running losses from steam mains, refer to Module 2.12 ‘Steam consumption of pipes and air heaters’. Alternatively, for quick approximations of running load, Table 10.3.3 can be used which shows typical amounts of steam condensed each hour per 50 m of insulated steam main at various pressures. 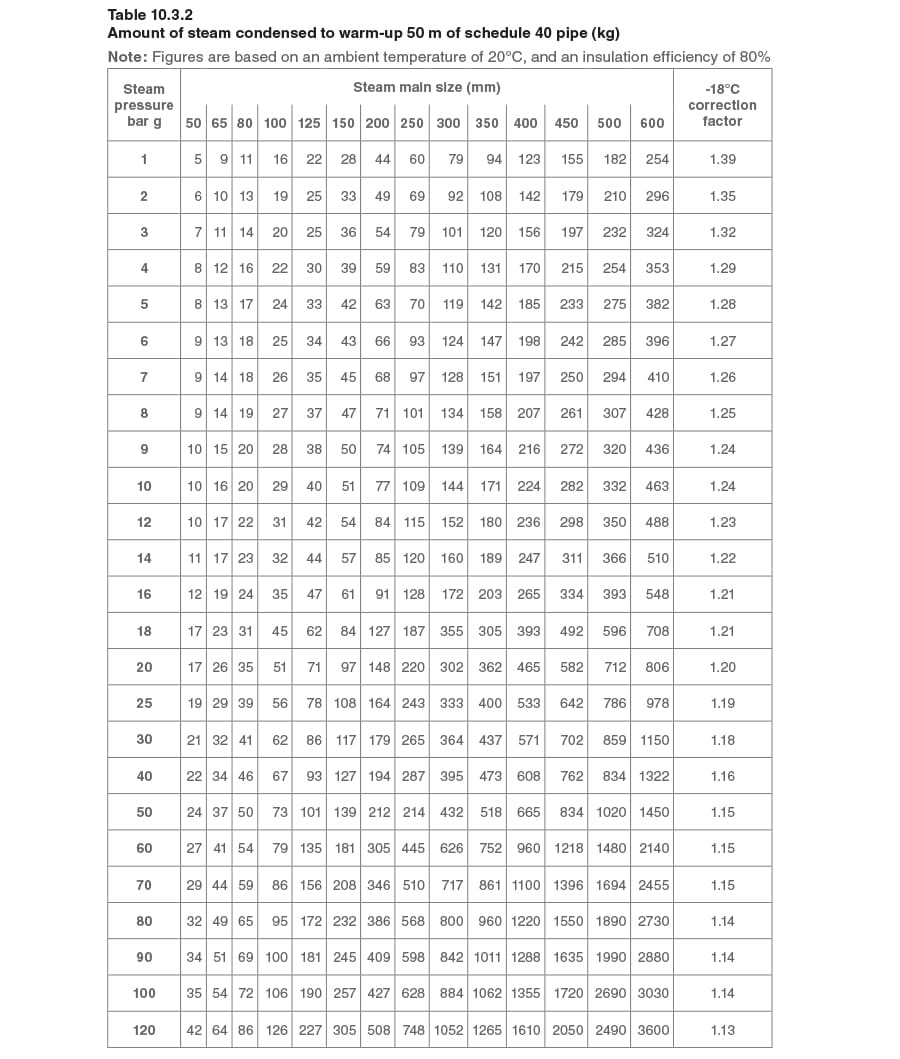 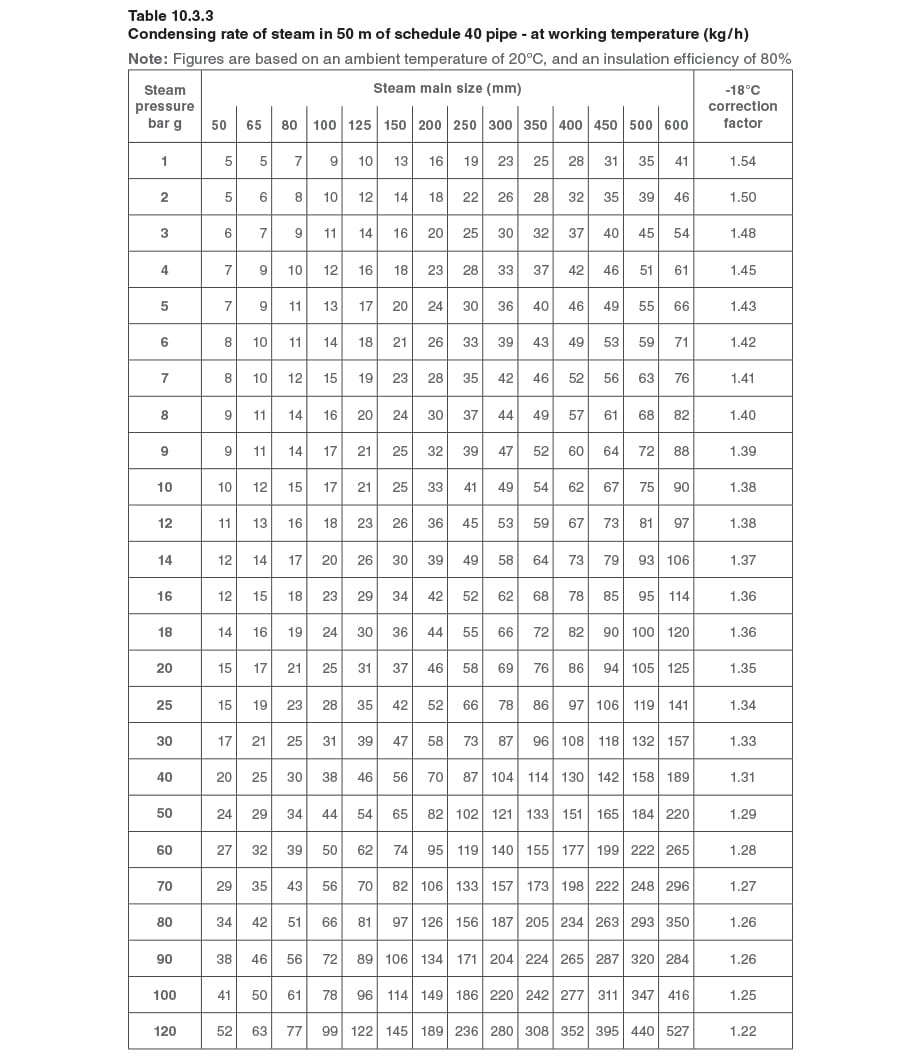 A mains drain trap should consider the following constraints:

that the choice is a mechanical type trap (such as a float, inverted bucket type, or thermodynamic traps).

Steam traps used to drain condensate from steam mains, are shown in Figure 10.3.14. The thermostatic trap is included because it is ideal where there is no choice but to discharge condensate into a flooded return pipe.

The subject of steam trapping is dealt with in detail in the Block 11, ‘Steam Trapping’.

Steam leaking from pipework is often ignored. Leaks can be costly in both the economic and environmental sense and therefore need prompt attention to ensure the steam system is working at its optimum efficiency with a minimum impact on the environment.

Figure 10.3.15 illustrates the steam loss for various sizes of hole at various pressures. This loss can be readily translated into a fuel saving based on the annual hours of operation.