Check (non-return) valves are installed in pipelines to allow flow in one direction only; helping to protect equipment and processes. The operation, benefits, applications and selection of different designs, including lift, disc, swing and wafer check valves are explained in this tutorial.

Check valves, or non-return valves, are installed in pipeline systems to allow flow in one direction only. They are operated entirely by reaction to the line fluid and therefore do not require any external actuation. In this text, the expected, or desired direction of flow is termed ‘forward flow’,

flow in the opposite direction is ‘reverse flow’.

There are a number of reasons for using check valves, which include:

These hydraulic forces can cause a wave of pressure to run up and down pipework until the energy is dissipated.

Although check valves can effectively shut off reverse flow, they should never be used in place of an isolation valve to contain live steam, in a section of pipe.

As with isolation valves, there are a number of different check valve designs, each suited to specific applications. The different types of check valve and their applications are discussed in this module, along with the correct sizing method.

Lift check valves are similar in configuration to globe valves, except that the disc or plug is automatically operated. The inlet and outlet ports are separated by a cone shaped plug that rests on a seat typically metal; in some valves, the plug may be held on its seat using a spring. When the flow into the valve is in the forward direction, the pressure of the fluid lifts the cone off its seat, opening the valve. With reverse flow, the cone returns to its seat and is held in place by the reverse flow pressure.

If a metal seat is used, the lift check valve is only suitable for applications where a small amount of leakage, under reverse flow conditions, is acceptable. Furthermore, the design of a lift check valve generally limits its use to water applications, subsequently, they are commonly used to prevent reverse flow of condensate in steam traps and on the outlets of cyclic condensate pumps.

The main advantage of the lift check valve lies in its simplicity, and as the cone is the only moving part, the valve is robust and requires little maintenance. In addition, the use of a metal seat limits the amount of seat wear. The lift check valve has two major limitations; firstly, it is designed only for installation in horizontal pipelines, and secondly, its size is typically limited to DN80, above which, the valve would become too bulky.

The piston-type lift check valve is a modification of the standard lift check valve. It incorporates a piston shaped plug instead of the cone, and a dashpot is applied to this mechanism. The dashpot produces a damping effect during operation, thereby eliminating the damage caused by the frequent operation of the valve, for example, in pipeline systems, which are subject to surges in pressure, or frequent changes in flow direction (one example would be a boiler outlet).

A swing check valve consists of a flap or disc of the same diameter as the pipe bore, which hangs down in the flow path. With flow in the forwards direction, the pressure of the fluid forces the disc to hinge upwards, allowing flow through the valve. Reverse flow will cause the disc to shut against the seat and stop the fluid going back down the pipe. In the absence of flow, the weight of the flap is responsible for the closure of the valve; however, in some cases, closure may be assisted by the use of a weighted lever. As can be seen from Figure 12.3.2, the whole mechanism is enclosed within a body, which allows the flap to retract out of the flow path.

Swing check valves produce relatively high resistance to flow in the open position, due to the weight of the disc. In addition, they create turbulence, because the flap ‘floats’ on the fluid stream. This means that there is typically a larger pressure drop across a swing check valve than across other types.

With abrupt changes in flow, the disc can slam against the valve seat, which can cause significant wear of the seat, and generate waterhammer along the pipe system. This can be overcome by fitting a damping mechanism to the disc and by using metal seats to limit the amount of seat wear.

The disc check valve consists of four main components: the body, a disc, a spring and a spring retainer. The disc moves in a plane at right angles to the flow of the fluid, resisted by the spring that is held in place by the retainer. The body is designed to act as an integral centring collar that facilitates installation. Where a ‘zero leakage’ seal is required, a soft seat can be included.

When the force exerted on the disc by the upstream pressure is greater than the force exerted by the spring, the weight of the disc and any downstream pressure, the disc is forced to lift off its seat, allowing flow through the valve. When the differential pressure across the valve is reduced, the spring forces the disc back onto its seat, closing the valve just before reverse flow occurs. This is shown in Figure 12.3.4. The presence of the spring enables the disc check valve to be installed in any direction.

The differential pressure required to open the check valve is mainly determined by the type of spring used. In addition to the standard spring, there are several spring options available:

An oversized check valve is often indicated by continuous valve chatter, which is the repeated opening and closing of the valve that occurs when the valve is only partially open. It is caused by the fact that when the valve opens, there is a drop in the upstream pressure; if this pressure drop means that the differential pressure across the valve falls below the required opening pressure, the valve will slam shut. As soon as the valve shuts, the pressure begins to build up again, and so the valve opens and the cycle is repeated.

Oversizing can usually be rectified by selecting a smaller valve, but it should be noted that this will increase the pressure drop across the valve for any one flow. If this is not acceptable, it may be possible to overcome the effects of chatter by reducing the closing force on the disc. This can be done either by using a standard spring instead of a heavy-duty one, or by removing the spring altogether. Another alternative is to use a soft seat; this does not prevent the chatter but rather, reduces the noise. Care must be taken however, as this may cause excessive wear on the seat.

Undersizing results in excessive pressure drop across the valve and, in the extreme, it may even prevent flow. The solution is to replace the undersized valve with a larger one.

Disc check valves are smaller and lighter than lift and standard swing check valves and subsequently cost less. The size of a disc check valve is however limited to DN125; above this, the design becomes complicated. Typically, such a design would include a cone shaped disc and a small diameter spring that is retained and guided along the centre line of the cone, which is more difficult and expensive to manufacture. Even then, such designs are still limited in size to DN250.

Standard disc check valves should not be used on applications where there is heavily pulsating flow, for example, on the outlet of a reciprocating air compressor, as the repeated impact of the disc can lead to failure of the spring retainer and high levels of stress in the spring. Specifically designed retainers are available for such applications. These designs typically reduce the amount of disc travel, which effectively increases the resistance to flow and therefore increases the pressure drop across the valve.

The design of disc check valves allows them to be installed in any position, including vertical pipelines where the fluid flows downwards.

These are similar to the standard swing check valves, but do not have the full-bodied arrangement, instead, when the valve opens, the flap is forced into the top of the pipeline. Subsequently, the flap must have a smaller diameter than that of the pipeline, and because of this, the pressure drop across the valve, which is often high for swing type valves, is further increased.

Swing type check valves are used mainly on larger pipeline sizes, typically above DN125, because on smaller pipelines the pressure drop, caused by the disc ‘floating’ on the fluid stream, becomes significant. Furthermore, there are significant cost savings to be made by using these valves on larger sizes, due to the small amount of material required for the construction of the valve.

There is however one problem with using larger size valves; due to their size, the discs are particularly heavy, and therefore possess a large amount of kinetic energy when they close. This energy is transferred to the seat and process fluid when the valve slams shut, which could cause damage to the seat of the valve and generate waterhammer.

Wafer check valves are becoming the preferred type of check valve for most applications, due to their compact design and relatively low cost. The following is a list of some of their most common applications:

In order to hold the hinge in the centre of the flow path, externally mounted retainer pins can be used. These retainer pins are a common source of leakage from the valve. An improved design secures the hinge internally, and as the valve mechanism is entirely sealed within the body, leakage to atmosphere is prevented (see Figure 12.3.13).

The valve is normally closed, as the disc plates are kept shut by the torsion spring. When fluid flows in the forwards direction, the pressure of the fluid causes the disc plates to hinge open, allowing flow. The check valve is closed by the spring as soon as flow ceases, before any reverse flow can occur.

The frequent opening and closing of the split disc check valve would soon cause seat damage if the heels of the disc plates were allowed to scuff against the seat during opening. To overcome this, the heel of the disc plates lift during the initial opening of the valve and the plates rotate purely on the hinge as opposed to the seat face.
The split disc type of check valve has several advantages over other types of check valves:

The above mentioned types of check valve are the most commonly encountered types in steam, condensate, and liquid systems. However, several other types are also available. The three types listed below are mainly suited to liquid applications and subsequently may be found in condensate systems:

In order to determine the pressure drop across the check valve for other liquids, the equivalent water volume flowrate needs to be calculated, this is done using the formula in Equation 12.3.1:

Alternatively, if te Kv value of the valve is specified, the pressure drop across the valve can be determined using the method outlined in Module 12.2.

The first step is to calculate the volumetric flowrate: 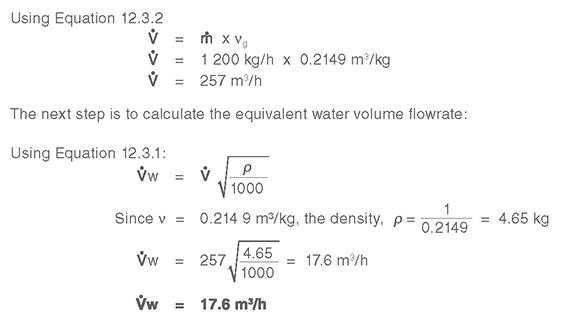 Using Figure 12.3.18, the pressure drop across the valve would be approximately 0.085 bar.