Home / Learn about steam /
An introduction to controls

An introduction to controls

This tutorial provides an introduction to the subject of automatic control, including the basic elements of a control system, different control functions, and relevant terminology, with some emphasis on safety, and stability & accuracy of control.

The subject of automatic controls is enormous, covering the control of variables such as temperature, pressure, flow, level, and speed.

The objective of this Block is to provide an introduction to automatic controls. This too can be

Both are immense subjects, the latter ranging from the control of a simple domestic cooker to a complete production system or process, as may be found in a large petrochemical complex.

The intention of this Block is to provide a basic insight into the practical and theoretical facets of automatic control, to which other skills can be added in the future, not to transform an individual into a Controls Engineer.

This Block is confined to the control of processes that utilise the following fluids: steam, water, compressed air and hot oils.

Control is generally achieved by varying fluid flow using actuated valves. For the fluids mentioned above, the usual requirement is to measure and respond to changes in temperature, pressure, level, humidity and flowrate. Almost always, the response to changes in these physical properties must be within a given time. The combined manipulation of the valve and its actuator with time, and the close control of the measured variable, will be explained later in this Block.

The control of fluids is not confined to valves. Some process streams are manipulated by the action of variable speed pumps or fans.

The need for automatic controls

There are three major reasons why process plant or buildings require automatic controls:

The more complex or dangerous the plant or process, the greater is the need for automatic controls and safeguard protocol.

Other desirable benefits such as economy, speed, and reliability are also important, but it is against the three major parameters of safety, stability and accuracy that each control application will be measured.

Specific terms are used within the controls industry, primarily to avoid confusion. The same words and phrases come together in all aspects of controls, and when used correctly, their meaning is universal.

The simple manual system described in Example 5.1.1 and illustrated in Figure 5.1.1 is used to introduce some standard terms used in control engineering.

Example 5.1.1 A simple analogy of a control system

In the process example shown (Figure 5.1.1), the operator manually varies the flow of water by opening or closing an inlet valve to ensure that:

At an initial stage, the outlet valve in the discharge pipe is fixed at a certain position.

The operator has marked three lines on the side of the tank to enable him to manipulate the water supply via the inlet valve. The 3 levels represent:

The Example (Figure 5.1.1) demonstrates that:

It is worth repeating these points in a slightly different way to reinforce Example 5.1.2:

In simple terms the operator’s aim in Example 5.1.1 is to hold the water within the tank at a pre-defined level. Level 3 can be considered to be his target or Set Point.

The operator physically manipulates the level by adjusting the inlet valve (the control device). Within this operation it is necessary to take the operator’s competence and concentration into account. Because of this, it is unlikely that the water level will be exactly at Level 3 at all times. Generally, it will be at a point above or below Level 3. The position or level at any particular moment is termed the Control Value or Actual Value.

The amount of error or difference between the Set Point and the Actual Value is termed deviation. When a deviation is constant, or steady state, it is termed Sustained Deviation or Offset.

Although the operator is manipulating the water level, the final aim is to generate a proper outcome, in this case, a required flow of water from the tank.

It can be assumed that a process typical of that in Example 5.1.1 contains neither valuable nor harmful ingredients. Therefore, overflow or water starvation will be safe, but not economic or productive.

In terms of stability, the operator would be able to handle this process providing he pays full and constant attention.

Accuracy is not a feature of this process because the operator can only respond to a visible and recognisable error. 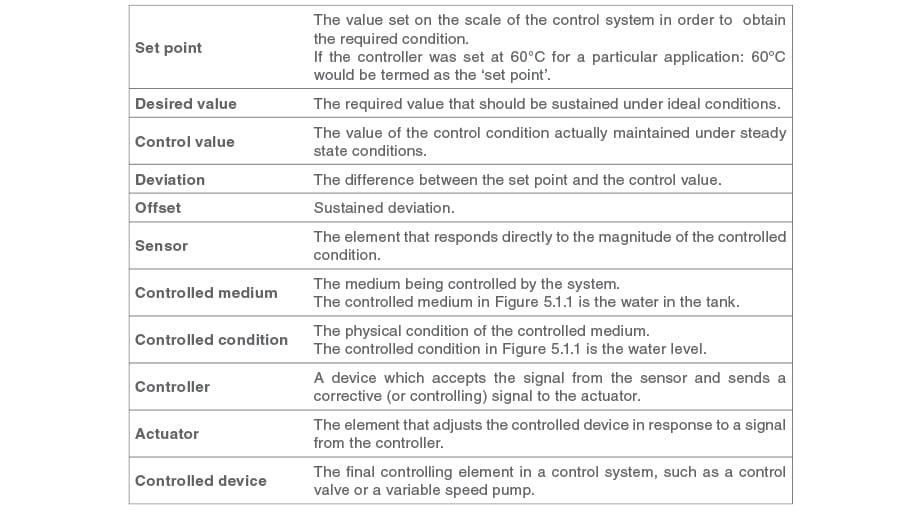 There are many other terms used in Automatic Controls; these will be explained later in this Block.

Elements of a temperature control system

Example 5.1.1 depicted a simple manual level control system. This can be compared with a simple temperature control example as shown in Example 5.1.3 (manually controlled) and Figure 5.1.3. All the previous factors and definitions apply.

The task is to admit sufficient steam (the heating medium) to heat the incoming water from a temperature of T1; ensuring that hot water leaves the tank at a required temperature of T2.

Whilst manual operation could probably control the water level in Example 5.1.1, the manual control of temperature is inherently more difficult in Example 5.1.3 for various reasons.
If the flow of water varies, conditions will tend to change rapidly due to the large amount of heat held in the steam. The operator’s response in changing the position of the steam valve may simply not be quick enough. Even after the valve is closed, the coil will still contain a quantity of residual steam, which will continue to give up its heat by condensing.

Experience will help but in general the operator will not be able to anticipate change. He must observe change before making a decision and performing an action.
This and other factors, such as the inconvenience and cost of a human operator permanently on duty, potential operator error, variations in process needs, accuracy, rapid changes in conditions and the involvement of several processes, all lead to the need for automatic controls.
With regards to safety, an audible alarm has been introduced in Example 5.1.3 to warn of overtemperature - another reason for automatic controls.

Components of an automatic control

Figure 5.1.4 illustrates the component parts of a basic control system. The sensor signals to the controller. The controller, which may take signals from more than one sensor, determines whether a change is required in the manipulated variable, based on these signal(s). It then commands the actuator to move the valve to a different position; more open or more closed depending on the requirement.

Controllers are generally classified by the sources of energy that power them, electrical, pneumatic, hydraulic or mechanical.
An actuator can be thought of as a motor. Actuators are also classified by the sources of energy that power them, in the same way as controllers.
Valves are classified by the action they use to effect an opening or closing of the flow orifice, and by their body configurations, for example whether they consist of a sliding spindle or have a rotary movement.
If the system elements are combined with the system parts (or devices) the relationship between ‘What needs to be done?’ with ‘How does it do it?’, can be seen.
Some of the terms used may not yet be familiar. However, in the following parts of Block 5, all the individual components and items shown on the previous drawing will be addressed.

Top Of The Page
Next - Basic Control Theory