It is useful to introduce the topic of steam by considering its many uses and benefits, before entering an overview of the steam plant or any technical explanations.
Steam has come a long way from its traditional associations with locomotives and the Industrial Revolution. Steam today is an integral and essential part of modern technology. Without it, our food, textile, chemical, medical, power, heating and transport industries could not exist or perform as they do.
Steam provides a means of transporting controllable amounts of energy from a central, automated boiler house, where it can be efficiently and economically generated, to the point of use. Therefore as steam moves around a plant it can equally be considered to be the transport and provision of energy.
For many reasons, steam is one of the most widely used commodities for conveying heat energy. Its use is popular throughout industry for a broad range of tasks from mechanical power production to space heating and process applications.

Steam is efficient and economic to generate

Water is plentiful and inexpensive. It is non-hazardous to health and environmentally sound. In its gaseous form, it is a safe and efficient energy carrier. Steam can hold five or six times as much potential energy as an equivalent mass of water.
When water is heated in a boiler, it begins to absorb energy. Depending on the pressure in the boiler, the water will evaporate at a certain temperature to form steam. The steam contains a large quantity of stored energy which will eventually be transferred to the process or the space to be heated.
It can be generated at high pressures to give high steam temperatures. The higher the pressure, the higher the temperature. More heat energy is contained within high temperature steam so its potential to do work is greater.

Modern shell boilers are compact and efficient in their design, using multiple passes and efficient burner technology to transfer a very high proportion of the energy contained in the fuel to the water, with minimum emissions.

The boiler fuel may be chosen from a variety of options, including combustible waste, which makes the steam boiler an environmentally sound option amongst the choices available for providing heat. Centralised boiler plant can take advantage of low interruptible gas tariffs, because any suitable standby fuel can be stored for use when the gas supply is interrupted.

Highly effective heat recovery systems can virtually eliminate blowdown costs, return valuable condensate to the boiler house and add to the overall efficiency of the steam and condensate loop.
The increasing popularity of Combined Heat and Power (CHP) systems demonstrates the high regard for steam systems in today’s environment and energy-conscious industries.

Because of the direct relationship between the pressure and temperature of saturated steam, the amount of energy input to the process is easy to control, simply by controlling the saturated steam pressure. Modern steam controls are designed to respond very rapidly to process changes.

The item shown in Figure 1.1.4 is a typical two-port control valve and pneumatic actuator assembly, designed for use on steam. Its accuracy is enhanced by the use of a pneumatic valve positioner.

The use of two-port valves, rather than the three-port valves often necessary in liquid systems, simplifies control and installation, and may reduce equipment costs.

Energy is easily transferred to the process

Steam provides excellent heat transfer. When the steam reaches the plant, the condensation process efficiently transfers the heat to the product being heated.

Steam can surround or be injected into the product being heated. It can fill any space at a uniform temperature and will supply heat by condensing at a constant temperature; this eliminates temperature gradients which may be found along any heat transfer surface - a problem which is so often a feature of high temperature oils or hot water heating, and may result in quality problems, such as distortion of materials being dried.

Because the heat transfer properties of steam are so high, the required heat transfer area is relatively small. This enables the use of more compact plant, which is easier to install and takes up less space in the plant. A modern packaged unit for steam heated hot water, rated to 1200 kW and incorporating a steam plate heat exchanger and all the controls, requires only 0.7 m² floor space. In comparison, a packaged unit incorporating a shell and tube heat exchanger would typically cover an area of two to three times that size.

The modern steam plant is easy to manage

Increasingly, industrial energy users are looking to maximise energy efficiency and minimise production costs and overheads. The Kyoto Agreement for climate protection is a major external influence driving the energy efficiency trend, and has led to various measures around the globe, such as the Climate Change Levy in the UK. Also, in today’s competitive markets, the organisation with the lowest costs can often achieve an important advantage over rivals. Production costs can mean the difference between survival and failure in the marketplace.

Ways of increasing energy efficiency include monitoring and charging energy consumption to relevant departments. This builds an awareness of costs and focuses management on meeting targets. Variable overhead costs can also be minimised by ensuring planned, systematic maintenance; this will maximise process efficiency, improve quality and cut downtime.

Most steam controls are able to interface with modern networked instrumentation and control systems to allow centralised control, such as in the case of a SCADA system or a Building/Energy Management System. If the user wishes, the components of the steam system can also operate independently (standalone).

With proper maintenance a steam plant will last for many years, and the condition of many aspects of the system is easy to monitor on an automatic basis. When compared with other systems, the planned management and monitoring of steam traps is easy to achieve with a trap monitoring system, where any leaks or blockages are automatically pinpointed and immediately brought to the attention of the engineer.

This can be contrasted with the costly equipment required for gas leak monitoring, or the time consuming manual monitoring associated with oil or water systems.

In addition to this, when a steam system requires maintenance, the relevant part of the system is easy to isolate and can drain rapidly, meaning that repairs may be carried out quickly.

In numerous instances, it has been shown that it is far less expensive to bring a long established steam plant up to date with sophisticated control and monitoring systems, than to replace it with an alternative method of energy provision, such as a decentralised gas system. The case studies refered to in Module 1.2 provide real life examples.

Todays state-of-the-art technology is a far cry from the traditional perception of steam as the stuff of steam engines and the Industrial Revolution. Indeed, steam is the preferred choice for industry today. Name any well known consumer brand, and in nine cases out of ten, steam will have played an important part in production.

Not only is steam an excellent carrier of heat, it is also sterile, and thus popular for process use in the food, pharmaceutical and health industries. It is also widely used in hospitals for sterilisation purposes.

The industries within which steam is used range from huge oil and petrochemical plants to small local laundries. Further uses include the production of paper, textiles, brewing, food production, curing rubber, and heating and humidification of buildings.

Many users find it convenient to use steam as the same working fluid for both space heating and for process applications. For example, in the brewing industry, steam is used in a variety of ways during different stages of the process, from direct injection to coil heating.

Steam is also intrinsically safe - it cannot cause sparks and presents no fire risk. Many petrochemical plants utilise steam fire-extinguishing systems. It is therefore ideal for use in hazardous areas or explosive atmospheres. 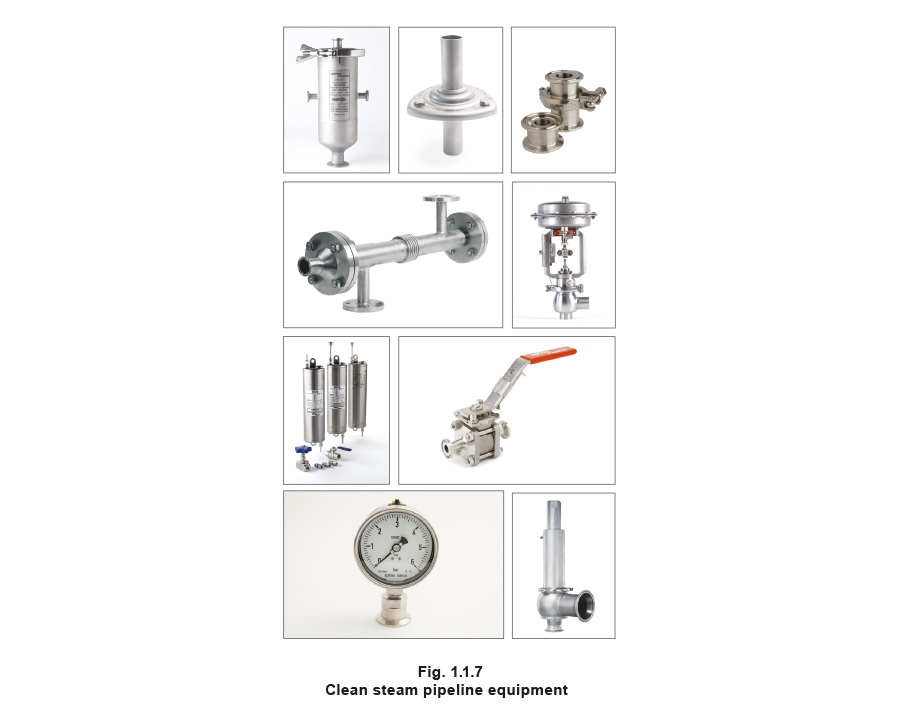 Other methods of distributing energy

The alternatives to steam include water and thermal fluids such as high temperature oil. Each method has its advantages and disadvantages, and will be best suited to certain applications or temperature bands.

Compared to steam, water has a lower potential to carry heat, consequently large amounts of water must be pumped around the system to satisfy process or space heating requirements. However, water is popular for general space heating applications and for low temperature processes (up to 120 °C) where some temperature variation can be tolerated.

Thermal fluids, such as mineral oils, may be used where high temperatures (up to 400 °C) are required, but where steam cannot be used. An example would include the heating of certain chemicals in batch processes. However thermal fluids are expensive, and need replacing every few years - they are not suited to large systems. They are also very ‘searching’ and high quality connections and joints are essential to avoid leakage.

Different media are compared in Table 1.1.1, which follows. The final choice of heating medium depends on achieving a balance between technical, practical and financial factors, which will be different for each user.

Broadly speaking, for commercial heating and ventilation, and industrial systems, steam remains the most practical and economic choice. 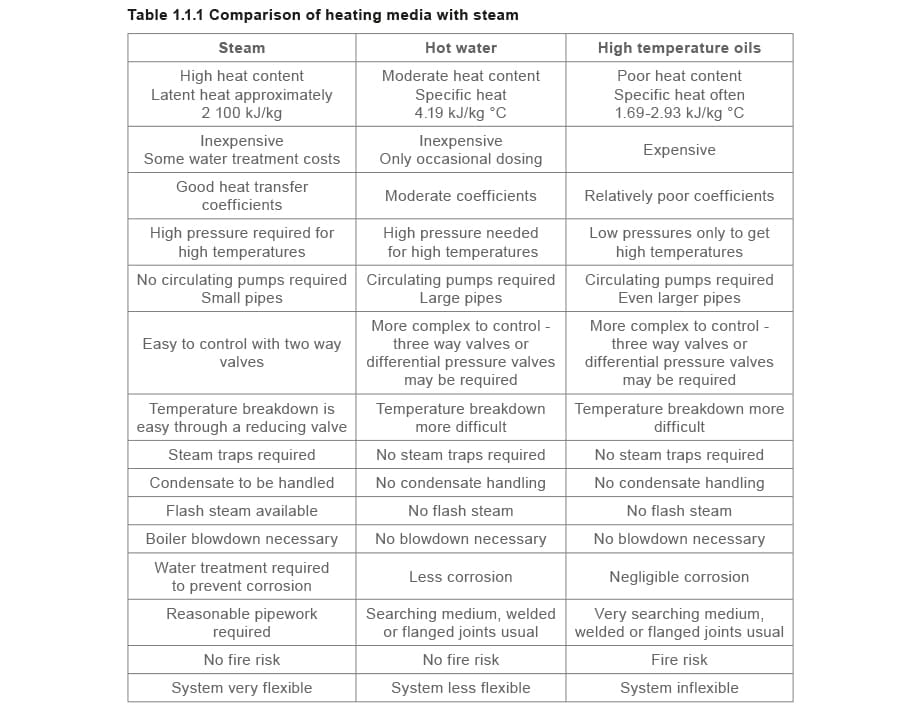 The benefits of steam - a summary: 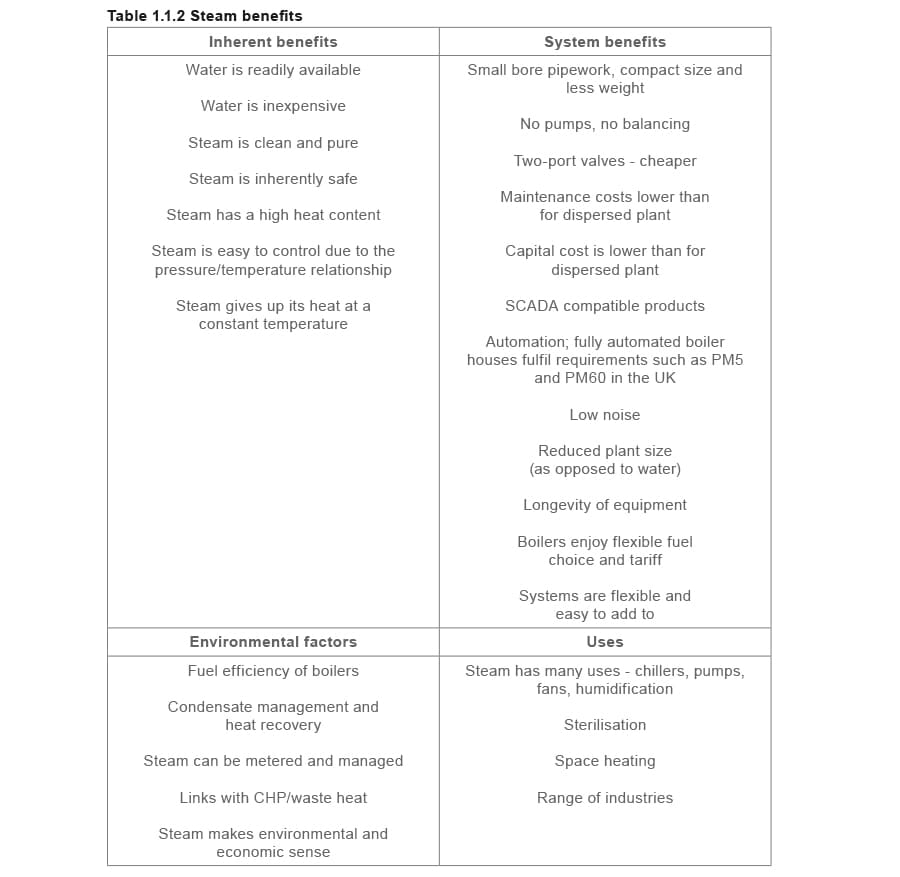 Top Of The Page
Next - Steam and the organisation